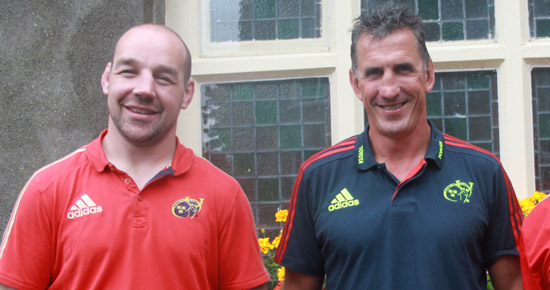 We catch up with Academy Manager Peter Malone.

Academy players in "A" action….

“The A Interpro games have given our Academy players an opportunity to show themselves in the Munster environment. We played Ulster Ravens last week in Deramore Park and we had a good Academy there. James Cronin started – James is a loosehead and is Year 2 Academy. He's a very good prop and had a fine game, scrummaging very well.

Duncan Casey came on as a hooker. Our two second rows were Academy second rows Brian Hayes and Phil Donnellan – both have been involved in the Senior squad for the whole summer. They played well too, and had a good opportunity for a run out. Cathal O’Flaherty and Shane Buckley both came on, so it was a good opportunity for most of our forwards to get a run out, and it was a good win too.”

“Out the backs then Ronan O’Mahony, Corey Hircock, Cian Bohane and Johnny Holland – four of the backs involved were Academy guys, so they’ll be happy with their day’s work. A lot of those guys, especially the guys who came off the bench would have played All Ireland League rugby over the weekend, so there’s a lot of rugby going on at the moment.”

“Other Academy players are also involved in Interpros at the moment, the two Academy guys with the U20s are Jack O’Donoghue and Brian Haugh. They played with the U20s against Leinster last week. They would have been disappointed with the result – Leinster won 26-12 – but the performance of the team in general was good. Munster will regret mistakes when they had a bit of pressure on Leinster. When the scrums went uncontested it maybe suited Leinster more. We felt we had an edge there. So that was disappointing from the 20s point of view and the two lads point of view.”

Has the new management team impacted on the Academy?….

“It’s freshened things up a small bit, a new voice, new philosophy. There’s a bit of energy around the place at the moment. Rob (Penney) has a history of being involved with academies in Canterbury and that’s a good thing, he knows where we are coming from certainly. I think everyone sees it as an opportunity because the coach starts with a blank sheet. He doesn’t know anyone here. Everyone is seeing it as a great chance to impress the new coach.”

"Philip Donnellan was a late developer and he’s come through in the last year, he was training with the senior squad last season so this is why he’s come in to year 2 of the Academy. He has been very impressive and we can’t speak highly enough about his work ethic and he’s giving himself every opportunity going forward.

Final year Academy players Brian Hayes, Corey Hircock and Ronan O’Mahony are all pushing very hard and they’re experienced and good guys. It’s for them to set the standards for the younger lads coming in. They’re playing a lot of "A" rugby and they'll be leaders in their team and in the Academy."

In fairness, they have over the last few weeks, they’ve stood up when they’ve gone back to their clubs. It’s a big part of our culture that we respect the clubs and where they are coming from and the lads have gone back and done well there.”

Cotter On The Bench For Irish