In Pics: Munster and Munster A 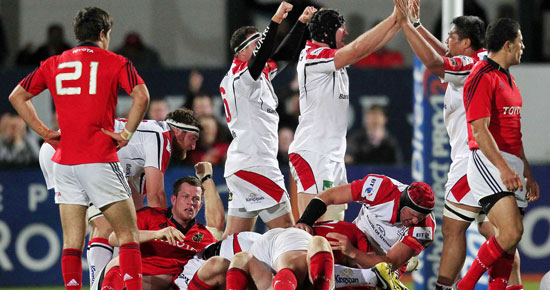 We show you pictures from Munster’s round 3 RaboDirect PRO12 defeat away to Ulster and pictures from the Munster A’s opening interpro victory against Ulster Ravens.

Munster are back in action this Saturday night in Thomond Park where they take on Welsh side Newport Gwent Dragons who suffered a home defeat against Cardiff Blues at the weekend.

The Munster As who recorded a last minute victory against the Ulster Ravens are in Interpro action again this week when they take on Connacht Eagles in Dooradoyle on Thursday at 5pm.

Pictures of Nevin Spence who lined out for the Ulster Ravens against Munster A on Friday are included in the next gallery as a tribute to an exceptional rugby talent and individual who tragically lost his life on Saturday.

View pictures from the A Interpro game here.