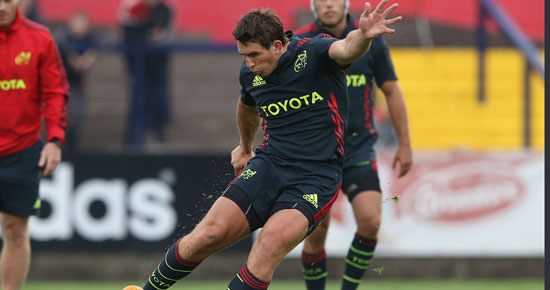 Munster complete their pre-season fixtures this evening in Musgrave Park against London Irish, and won’t play in the Cork venue again until November, so don’t miss your chance to support the team tonight.

Munster and London Irish will once again compete for the this evening . This will be the fourth time that the two teams have played for the trophy which Munster won in last year's victory in a pre-season friendly at Thomond Park Stadium.

Tickets for the covered West Stand cost €;€20, with free seating in place.

Match Programmes will be on sale inside both entrances for €;€4.

Pre-match and half-time entertainment will be provided by Pat Fitz.

The Munster Rugby mobile store will also be on site inside the Dolphin gate entrance.

CARI Collection – There will be a collection at the game on Friday night with all donations going to CARI, who provide child centred therapy for children and adolescents who have been affected by sexual abuse. Please support such a worthy cause.

Parking – We would encourage all supporters driving to the game to use the Black Ash Park and Ride facility, located on the Kinsale Rd. and 10 minutes walk from the grounds. It will remain open to facilitate supporters travelling to the game and the cost is €3 per car.

We would ask that supporters respect the local residents by not parking illegally, any cars obstructing entrances/exits will be clamped and towed.

The Jack Wakefield Trophy originated with the desire of supporters in England and Ireland to create a lasting and appropriate memorial to a remarkable little man.

Jack Wakefield was the son of Nikki and Gordon Wakefield, London Irish supporters from Newport on the Isle of Wight. Early in his short life Jack was diagnosed with a brain tumour. Despite the demands of the medication and treatment that he had to undergo, he maintained a happy disposition and regularly attended London Irish games when he was well enough.

Jack died on 21st June 2005 aged three. His inspirational struggle touched rugby fans across the world thanks to the publicity his story generated on the message board of the London Irish Supporters' Club and through clubs across the world, including the Munster Rugby Supporters Club.

In donating the memorial trophy, the supporters requested that it be contested every time that London Irish played an Irish province in a friendly match.

The trophy was first competed for on 25th August 2006 at Donnybrook, Dublin when London Irish played Leinster in a pre-season friendly. Irish won by 25-10 and thus became the first holders of the trophy. Munster have maintained their hold on the Trophy since then, winning it for the first time in August 2008.

Munster Rugby thank you for your continued support.