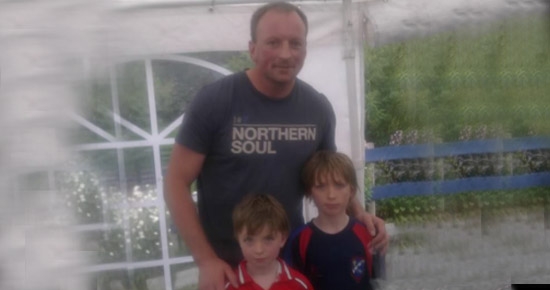 The Gods of the weather smiled on Manning's Emporium on Sunday (July 8th), on the occasion of their annual barbeque. This year the funds were in aid of Bantry Bay R.F.C, who decided to invite Mick O'Driscoll as guest of honour, with his wife Alice and their new three week old baby, to honour Micks outstanding career with Munster.

It was a lovely family day out. Bantry players, young and old, and their families turned out to make it "just a perfect day"! The Calvinists provided the music in the marquee, which added greatly to the event! The proprietors of Mannings Emporium, Andrew & Laura, and of course Val, were wonderful hosts.

The barbecue was run by Kate & Eugene O'Brien, who did the cooking. The food tasted as good as the lovely aroma and smells associated with open air cooking. Margaret Clarke, Christine Fitzgerald & Esther O'Hehir served up the food and kept the busy line moving, to everyones satisfaction.

Damian Moloney, Club President, presented a Waterford Crystal Bowl, with an inscribed plinth, to mark Mick O'Driscoll's retirement from playing. Mick clocked up an amazing 207 caps for Munster, 35 for Perpignan and 38 caps for Ireland at full and A Levels. What a career! He joined Ronan O'Gara on 219, Peter Stringer on 223 and John Hayes on 217. Mick has won Heineken Cup Medals, Celtic League and a European Colleges Medal with U.C.C. But he was about more than just medals. His line out play, his fearless leadership and how he always gave everything on the pitch, in what can only be described as a glittering career.

Mick Galwey was his usual self. Friendly banter was the order of the day between the two Munster stars. Mixing with the families and fans, they added to everyones enjoyment!.

Stephen & Gillian O'Donovan (The Brick Oven / Mariner Bar) prepared and cooked some of the food, provided tables, advice and helped in so many ways to make the day a success.

The Calvinists music suited the day wonderfully. Easy listening for young and old, they had the crowd bopping & weaving to their very distinctive sound.

Manning's Emporium allowed use of the venue, arranged sponsorship, contributed a Hamper, helped with advice and direction, in what was a day to remember.

Pre-season training commenced this week and encouraging signs for the club were the numbers of players in attendance that have come through from the Under 19s. In any rebuilding process youth is an essential ingredient and this was very obvious in The Vale on Monday night. Another essential ingredient is experience and leadership. This was evident with many established players like David Lombard and Batt Duggan in attendance but no more so than in the persona of Alfie Harte back from his travels. Alfie, a past captain of both club and country, is one of Clonakilty’s outstanding talents and his return is a very welcome boost for the club. Training will continue for the first six weeks on Mondays, Wednesdays, Fridays and Saturday mornings.

Players are asked to be on the pitch by 7.15pm for a 7.30 start on Mondays and Wednesdays. Fridays will be indoor circuit-training at Darrara College Hall at 7.15pm and Saturday mornings will be short intensive hill-training sessions near the rugby club, meeting clubhouse at 9.30am. This will be the format for the first six weeks and there is little doubt that those who apply themselves will achieve a high level of fitness. The first competitive cup games for the Seniors start at the end of August. Early Sept. sees J2 and J3 games with English Tour fixtures in Cheltenham for Senior and Vets squads before All Ireland League begins 29th of September. Players may join the programme at any stage and new members are particularly welcome. Details Kevin O’Regan 086 832 9993.

Random Acts of Kindness Festival
The club will be demonstrating its appreciation of the local support it receives as a community club in a practical way this Saturday. The club will organise two work parties to take on tasks that will contribute to the quality of life in the area. One group will be doing a spot of gardening and cleaning for the Society of St. Vincent de Paul and the other will help clean from The Waterfront to The Retreat down the Inchydoney road with the assistance of Clonakilty Tidy Towns. Volunteers are asked to assemble at 11.00am to give just two hours to help with these projects.

Flood Relief Fundraiser
The day of community support continues that evening in Scannells with the inaugural Dance-Off and BBQ. This event had originally been planned as a club fundraiser but because of the recent devastation caused by the floods to local homes and businesses it has been decided to donate the entire proceeds to the Flood Relief Fund. In addition, as Saturday is Lotto night, the receipts from the Lotto cards sold on the night will be donated to the fund also. All involved have given their services free of charge and the generosity of sponsors Clonakilty Black Pudding, Con Twomey Fruit & Veg, James Deasy & Co, Scally’s Supervalu, SFPA, Shannonvale Foods, The Emmet Hotel and Scannells, will ensure that all proceeds go to the fund.
It will be a fun evening with DJ Pete and MC Brian Dillon in the house and the inaugural Dance-Off has a cup and T shirt for the winner and Commemorative T-shirts for the five runners-up. All six wearing theT-shirts will also receive passes into the Emmet Night Club that evening. More information including a video clip of a dance-off can be found at this link: http://www.clonflood.com/2012/07/bbq-and-dance-off-21st-july.html?m=1 Tickets for the evening cost only €;10.00 and are available from: The Emmet Hotel, Fernhill House Hotel, Fuschia Footwear, James Deasy Accountants and Club Members. All members are asked to support this very worthwhile cause.
Cheltenham 2012
Arrangements for the club tour to Cheltenham Tigers is well under way. The group will depart Friday 7th September by luxury coach and the short ferry trip to Pembroke will see the group arrive in Cheltenham before 4.00pm. It is intended that there will be two games played with The Vets (over 35s) playing that evening and the senior squad taking the field on Saturday.
The tour is an opportunity for players, alickadoos and supporters to forge a common bond. It will also be an ideal opportunity for team building in a relaxed but focused environment. Tourists will be back in Clon before 10.00pm Sunday night. The tour is open to all and will cost only €;200.00. A €;50.00 non-refundable deposit is required by July 21st to secure one of the 53 places available.
Register now at loosehead@eircom.net or Contacts:
Players – Kevin O’Regan 086 832 9993
Vets – Bernard Hart 086 834 6923
Alicadoos – Roy Maguire 086 60 11 1 11

Summer Camp
The annual children’s summer camp will take place over four days from the 7th August to the 10th August 2012 inclusive in the superb setting and facilities in The Vale. There will be a big emphasis on ball skills but also the camp will be working towards an adventure race in the rugby club grounds on the last day. F1 Fitness centre operator, Roger Adams, will be very much involved. Roger is an IRFU certified conditioning coach and his F1 Fitness centre has been recognised as a satellite centre for the Munster Youth Development Program in the South West. It provides an opportunity for young rugby players to improve their physical conditioning as part of the Youth Talent Development Program. Roger will have a time slot each morning when he will be coaching and mentoring the youngsters.

Midleton RFC will host a ‘Clash Of The Legends’ one day tag rugby tournament on Saturday, 21st July.

Rugby legends from international and provincial levels including Anthony Foley, Mick Galway, Jason Holland and many more will compete for the Pat Good Memorial Cup with proceeds going to the Hope Foundation charity.

A BBQ will be provided on the day as well as a bouncy castle to keep the kids entertained.

The fee is €;5 per adult with free entry for kids. For further details or to register your Tag Team please email susan@hopefoundation.ie or tel 021-4292990

Penney and Mannix In