U20 Squad Leave For South Africa 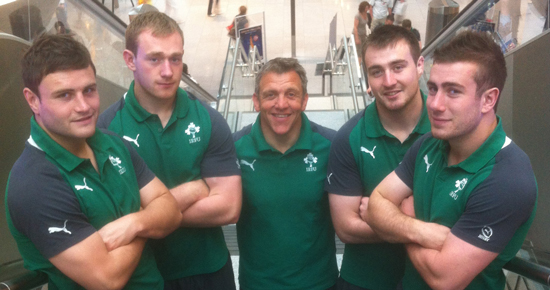 The Ireland U20 squad assembled in Dublin airport today for their flight to Cape Town, South Africa, where they will compete in the Junior Rugby World Cup championship.

Grouped with the host country South Africa, Six Nations champions England and Italy, Ireland assistant coach Greig Oliver is optimistic ahead of the tournament “the squad have regrouped after the season and exam commitments and are really looking forward to the event, which is a flagship tournament for the players of the future. The environment for this event will be invaluable to the players’ development and I am sure everyone will benefit enormously, both on and off-the-field."

Having finished eighth in last year's event in Italy, Ireland are keen to improve after recording four victories out of five in the recent Six Nations tournament.

Ireland take on South Africa on Monday in their first match of the competition and Oliver is fully aware of the task ahead "we are under no illusions of how hard taking on South Africa in South Africa will be and we are focussing all our attention on this match. We feel we have a good squad who are desperately keen to show their talents on this stage.'

Ireland will name their squad tomorrow for the South Africa game, kicking-off on Monday at 6.45pm local time (5.45pm Irish).

All Ireland fixtures will be televised on TG4.

Video: Inside The Munster Academy