Munster Catches Up With David Kilcoyne 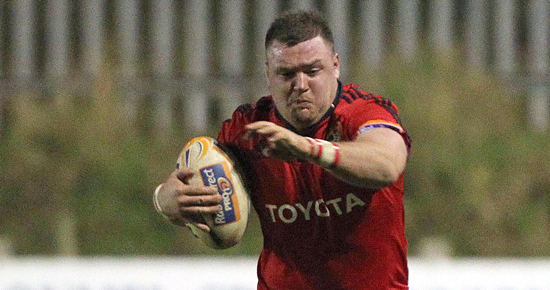 In advance Munster’s B&I Cup semi-final against Leinster which kicks off tomorrow night in the RDS at 6pm we catch up with Munster prop David Kilcoyne.

Twenty-two year old Limerick native Dave Kilcoyne, who is in the second year of the Munster Rugby Academy has previously appeared for Munster in this competition, debuting in the inaugural competition in the 2009/10 season, and playing in the 2010 final against Cornish Pirates.

Getting To Know David Kilkoyne:

Book you are currently reading or have just finished:
City Boys

Favourite Actor/Actress:
Alan from the Hangover

Marooned on a desert island what could you not be without:
Food

Favourite sport other than rugby:
Tennis

Person you would most like to meet:
Johnny Drama

Where and when did you first play rugby:
With UL Bohs U8's

Best career advice you were given:
Keep working hard and take your time

What you like most/least about being a rugby player:
The friends you make. 90 second drills at the end of training.

Other sports that you played:
Hurling, Soccer, Basketball and Gaelic Football

Sporting event you would most like to attend:
Watch Usain Bolt set another record

If you weren’t a rugby player what would you be:
A businesss man

Three people you would invite to dinner and why:
Johnny Drama, John Goodman from Roseanne and Mike Sherry to see if they are related or do they just look alike