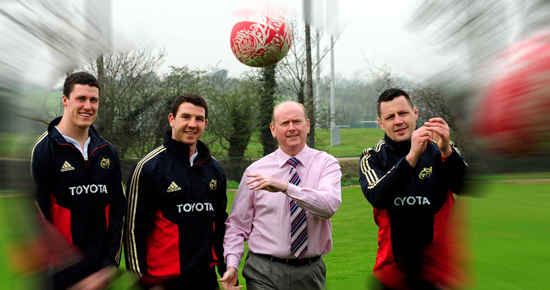 The sixth annual Munster Rugby Awards in association with The Irish Examiner, will take place on Saturday 5th May at Thomond Park Stadium in Limerick.

Uniting the domestic and professional elements of the game, this evening is a celebration of rugby in the province at all levels.

Guests attending the Awards will also be able to support the Munster team on the night when they take on Ulster in the final round game of the RaboDirect PRO12. All funds raised will go towards the running of and development of the Munster Rugby Academy.

Speaking at the Launch Garrett Fitzgerald, Munster Rugby CEO said “We are very pleased that The Irish Examiner have extended their sponsorship of the Munster Rugby Awards, for the sixth year, and are grateful to Tony and his team for their ongoing support.

“The purpose of the awards is to recognise individual performance in rugby in Munster, as well as the achievements of clubs and schools both on and off the pitch. With eleven diverse categories being honoured, ranging from Munster Player, Young Player and Academy Player of the Year including women’s rugby, referees, schools and clubs.”

Tony Leen, Sports Editor at The Irish Examiner added: The Irish Examiner is proud to be involved in these prestigious awards. Our continued support for the Munster Rugby Awards is a reflection of our own passion and commitment to rugby at all levels, from international to underage and to the all-important junior ranks.”

In addition, event sponsors, The Irish Examiner will be running a competition in the build up to the Awards, asking their readers to vote for Munster’s Player of the Year. Prizes include tickets to attend the Gala Awards evening, as well as the chance for a class to tour Thomond Park Stadium.

Supporters and business can purchase a table or individual places for the awards dinner which include match tickets. A table of ten costs €;1,950 can be purchased by contacting Andrew Neenan at Munster Rugby on 086 2497530 or email andrewneenan@munsterrugby.ie

In Pics: Munster Training In Fota