Foley Out For A While 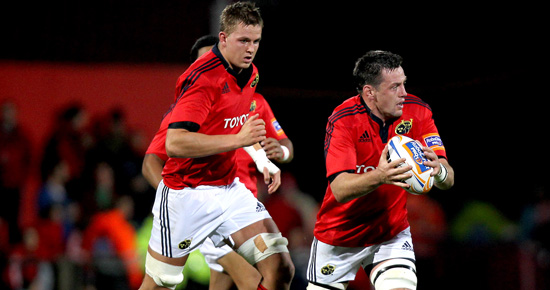 Dave Foley suffered a shoulder dislocation in Munster’s game against Dragons on Saturday night, replaced in the 63rd minute by Billy Holland.

In what was just his third start of the season, Foley, who had impressed up to the time of his injury was removed to Gwent Hospital but was discharged in time to join his colleagues for the flight home. He'll have further medical examination today.

Reports from the Irish camp suggest that the damage Conor Murray suffered to his knee may not be as bad as first thought. He looked to be in a lot of pain when he went down in the 59th minute and suggestions that he may yet feature against Scotland seem fanciful.

Meanwhile, Leinster Rugby have confirmed that the British & Irish Cup semi-final against Munster has been moved to the RDS and will be played on Good Friday, 6th April (KO: 6pm).

Munster Edge It In Rodney Parade