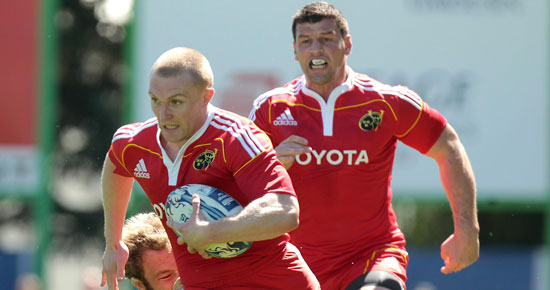 Denis Leamy and Keith Earls have renewed thir contracts that will see them remain Munster players for the next two seasons.

Leamy is recuperating from a hip injury while Earls returns to the Ireland camp today and is expected to be named in the Ireland side for the game against France on Saturday, when it's announced on Thursday.

Commenting on the news Leamy said, “I’m delighted that my contract has been sorted and that I can concentrate on getting back on the field as soon as possible. I’ve achieved a lot in my career, winning the Six Nations as well as Heineken Cup and League titles, but there is always the desire to try to continue that and achieve even more. It also makes it more pleasing to do that with Munster and to remain here in Ireland with my home province.”

Back To The RaboDirect PRO12