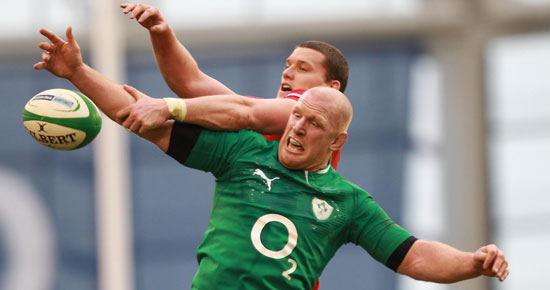 Jonathan Sexton got Ireland off to a good start in the third minute with a successful penalty kick. Ten minutes later came the first try of the match from Wales’ Jonathan Davies which out-half Rhys Priestland failed to convert.

Two consecutive penalty misses from Priestland and Sexton followed before Rory Best scored Ireland’s opening try in the 37th minute. Sexton added the extras giving the home side a 10-5 lead at the break.

Sexton opened up the scoring in the second half with a penalty after two minutes. Leigh Halfpenny, who took over the kicking duties from Priestland then added to the Welsh total with a penalty kick seven minutes later.

Ireland winger Tommy Bowe got over the line for the home side’s second try which Sexton failed to convert giving Ireland a 21-15 lead in the 67th minute.

With just five minutes left on the clock Wales winger George North scored in the corner, Halfpenny failed to convert leaving Ireland ahead by one point.

Irish hopes of a grand slam were shattered when Stephen Ferris was penalised for a spear tackle in the final minute which the composed Halfpenny slotted to bring the final score to 21-23 in favour of the Welsh.

Back To The RaboDirect PRO12