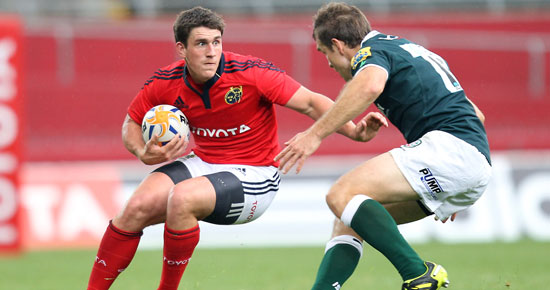 Simon Zebo, who was called into the squad last Monday to replace the injured Luke Fitzgerald will start on the wing with Ian Keatley named in the out-half position.

Munster’s Stephen Archer and Damien Varley have been named in the front row next to Connacht loose head prop Brett Wilkinson.

Ulster Back row Chris Henry will captain the side that shows a balance between youth and experience, with nine of the match day 22 uncapped at senior level.

Head Coach Eric Elwood is looking forward to the game and the challenge of playing a Saxons team that is packed full of premiership and European experience. “The games against the Saxons are always highly competitive affairs as you would expect and results have tended to go with the home side, but I think we have a good mix in our side and the key message is that we have to match them on all fronts, especially in the physical stakes, to come away with a win. “Eoin (O’Malley) and Nevin have done well over the last couple of days as a pairing and I am looking forward to see how both Simon (Zebo) and David Kearney travel on the wings after a good couple of weeks for them with their provinces.

“We have a touch more experience in our pack, which I think will be important for this game and good spine through it with Dan Touhy and Mike McCarthy giving us some really good ability across the set piece and in the carrying stakes to compliment a back row that I think can make a good impression.

“I would expect a really good atmosphere for the game and I know the players are looking forward to it.”