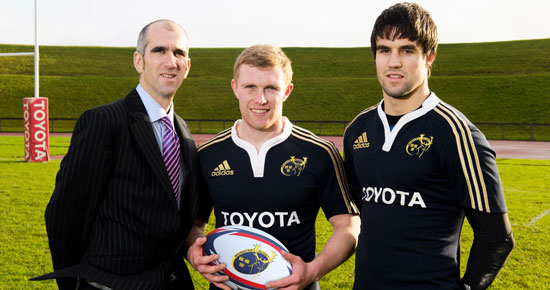 Munster Rugby announced this week that it has signed a two year partnership deal with Magnet Networks to become the official phone and broadband provider.

Under the terms of the partnership the national telecommunications company will be the exclusive provider of fixed line phone and broadband services to Munster Rugby’s match venues, training grounds and offices across a total of eight sites in Cork and Limerick.

The services are provided over Magnet’s own fixed line broadband network, delivering speeds of up to 24 Mbps,

ensuring speedy and efficient communications between offices and match grounds.

Commenting on the Partnership Philip Quinn, Munster Rugby’s Finance Controller stated “We are delighted to be developing this new partnership with Magnet Networks who were chosen for the quality of their un-contended broadband and specific service to all our offices as well as Musgrave Park and Thomond Park Stadium. The Broadband and fixed line package is excellent and provides our business with state of the art connectivity with cost savings built in”

Tom Larkin, Marketing Manager for Magnet Networks says of the deal: “We are delighted to be associated with an Organisation of such high calibre and quality whose values very much echo that of Magnet Networks. We believe the partnership will help strengthen Magnet’s ties with local communities and demonstrate our committment to homes and businesses all over Munster.”

Magnet provides phone and broadband services nationwide and has invested in its own network in Cork and Limerick as well as Dublin, Galway, Waterford and Portlaoise. This investment has meant it can now offer the fastest speeds in these areas as well as low-cost phone services.

Magnet Networks, the parent company for Magnet Entertainment and Magnet Business, has provided phone, broadband and television services to the Irish marketplace since 2005.

The company has pioneered super-fast broadband in Ireland offering speeds of up to 100Mbps and owns the largest fibre network in Ireland and the UK. For more information visit Magnet Networks at www.magnet.ie.