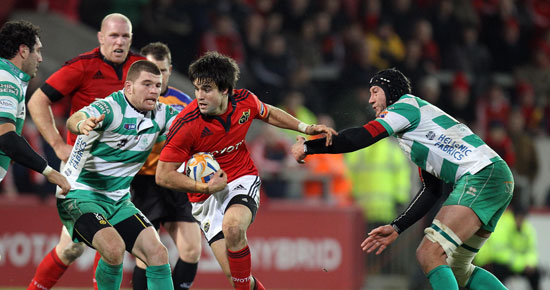 Munster move up to third place following a 29-11 win over Benetton Treviso tonight at Thomond Park Stadium in Round 13 of the Rabo Direct PRO12 league.

Munster led Treviso 10-6 at half time in front of a 8,432 crowd. Niall Ronan scored Munster's first try after a superb off-load from Lifeimi Mafi in the 23rd minute. Ronan retired shortly after having injured an ankle in the process of scoring that try.

However it might have been much closer when Treviso were awarded a penalty in added time but Kris Burton's touchline effort came back off the upright.

The second half saw tries from Keith Earls, man of the match James Coughlan and Simon Zebo giving Munster a bonus point win.

Following Glasgow's away defeat to Scarlets earlier this evening Munster are just one point from second place Ospreys with Leinster topping the table on 48 points.