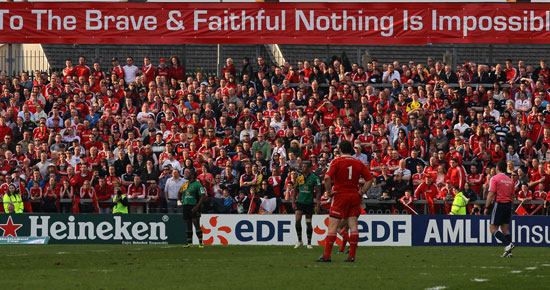 Defeat in Ravenhill on Friday coupled with Glasgow’s 17-12 win over Edinburgh in Firhill sees Munster slip from third to fourth place in the RaboDirect PRO12 league table.

Leinster maintain their place at the head of affairs after their 15-13 win over Connacht who outscored the European champions two tries to nil and saw an injury time Miah Nikora drop goal drop just under the bar in the last action of the match.

Next up for Munster is the visit of Treviso to Limerick next Saturday, kick-off time 8.15. The Italian side, who've already beaten Connacht and Ulster on the road, warmed up for that with a 37-14 win over Aironi on Saturday.

On the injury front, of the three players, Damien Varley, Tom Gleeson and Tommy O'Donnell, who retired in the course of the game in Belfast, Varley looks to be the least serious but Gleeson (shoulder) and O'Donnell (knee) will require further medical examination later in the week to establish the full extent of their injuries.

Peter O'Mahony (jaw) is expected to resume training this week with a possible return, subject to medical clearance, against the Italians on the cards.