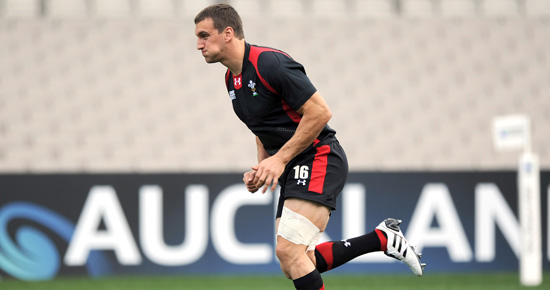 Despite a second half Mike Phillips try, Wales bowed out of the World Cup after losing 9-8 to France in Auckland today

Despite a second half Mike Phillips try, Wales bowed out of the World Cup after losing 9-8 to France in Auckland today

And it was the decision from Ireland's Alain Rolland that had a profound affect on this game. He sent Welsh captain Sam Warburton off in the 17th minute for a dangerous tackle on Vincent Clerc, a decision that was widely criticised.

France led 6-3 at half-time and dominated the opening stages of the second half. From a line-out and subsequent rolling maul Paul James, an early replacement for the injured Adam Jones,  was penalised and Morgan Parra, who'd kicked their opening scores, made it 9-3.

By then Stephen Jones had replaced the out of sorts James Hook and Jones gave his side the best positional gain in the 57th minute with a clever kick into the 22 that ended with a marvellous Mike Phillips try. The conversion shaved the outside of the left upright.

Wales dominated the closing stage and with ten minutes to run, applied the pressure, inched closer and closer but for some inexplicable reason didn’t go for the drop goal.

They had one more chance, Leigh Halfpenny with a penalty from just inside his own half. It had everything except the distance, dropping just beneath the crossbar.

And France were fortuitously through to the final.