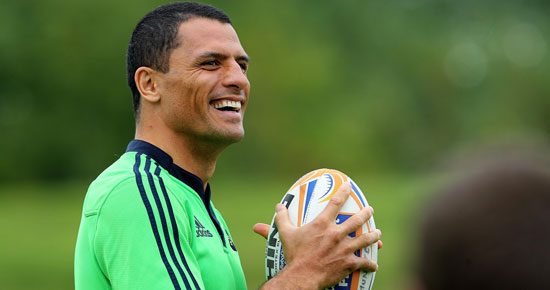 Evening kick offs, 7.30pm as is the case this evening, make for a long and often tedious day in the life of a rugby player.

Evening kick offs, 7.30pm as is the case this evening, make for a long and often tedious day in the life of a rugby player.

The prospect of a lie-in and late breakfast wasn't an option for Doug Howlett who was up bright 'n breezy this morning to see former colleagues Dan Carter, Richie McCaw lead the All Blacks in the opening World Cup game against Tonga in Auckland’s Eden Park.

Despite the ties that bind Howlett to the Blacks’ opponents, there were no divided loyalties. Of Tongan heritage, Howlett made his international debut against Tonga at the North Harbour Stadium in June 2000, coming off the bench to score two tries in the exalted company of Christian Cullen, Jonah Lomu and Justin Marshall, not forgetting also that his inside centre tonight in Firhill will be Tongan Lifeimi Mafi.

Billetted in the Menzies Hotel with his Munster teammates and rooming with Tom Gleeson ahead of the RaboDirect PRO12 League game against Glasgow Warriors, Howlett remains enthusiastic about the All Blacks chances of capturing their first RWC title since 1987.

“Yes I guess there is huge expectation but the overwhelming expectation comes from within the squad. From the players themselves and how they expect themselves to perform. I believe they'll embrace the challenge, the envirnoment they find themselves in and I don’t see the external pressures as a major hindrance” he said.

“It's been a good start. I would have expected that type of game we saw this morning. Tonga are a proud nation. Very passionate. They were never going to roll over.  I know looking at media reports they had a huge support base down in Auckland. I think seven or so thousand turned up at the airport to greet the team when they arrived.”

The All Blacks last outing caused more than a ripple of nerves among Kiwis with the defeat by Australia that gave their great rivals the Tri Nations title to carry into the World Cup. If it concerns Howlett he shows absolutely no sign of it.

“History tells us it doesn’t have huge significance. We’ve gone into World Cup tournaments on top of the world.  Speaking from the last two that I played in, the Tri Nations was a huge success for us and we tripped over in the World Cup.  So I guess the World Cup is a one-off event and that makes it so special. Everything you’ve done before that doesn’t count for anything.”

Howlett’s form on the field has been good and he admits that his form off it improved considerably after the Sun Newspaper finally printed an apology over its reportage of an incident involving him at the squad Christmas outing. In December, that newspaper made Howlett front page news but in early August printed the following apology.
“The Irish Sun published a report on the 23rd December 2010 in which we reported that an injury was sustained by a hospital porter during a scuffle with Mr. Doug Howlett.  We are happy to clarify Mr. Howlett did not tackle or come into any physical contact with the hospital porter in question. The hospital reporter referred to was injured during a scuffle on that night but Mr Howlett wasn’t involved in that scuffle.  We can confirm that Mr. Howlett was not ejected from any public house on the night in question and was not accused of being disorderly by the staff of any public house.
We apologise to Mr.Howlett for any confusion.”

“Those reports were carried in newspapers all over the world. So it was important for me, for my family and friends here and those back home that the circumstances of that night were clarified.  Unfortunately while the story back then reached the NZ media I’m not so sure the apology did. But look, I’m glad it’s on the record now.”

Howlett, now in his fourth season with Munster and “delighted that we decided to come here” won’t turn his thoughts to extending his stay until much later in the season. For now his focus is on the clash with Glasgow Warriors at Firhill.