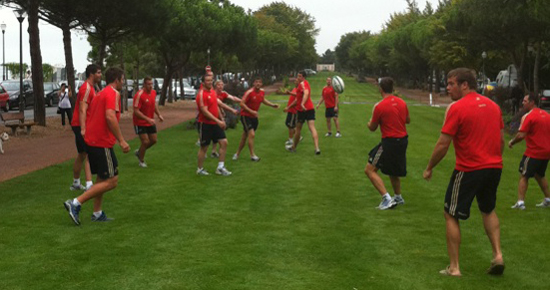 Unlike the thousands of holiday makers, Munster players will have welcomed the cloudy skies and light rain that drifted in off the Atlantic today ahead of their opening game of the season against La Rochelle.

Unlike the thousands of holiday makers, Munster players will have welcomed the cloudy skies and light rain that drifted in off the Atlantic today ahead of their opening game of the season against La Rochelle.

It means conditions will be a little more favourable when they take on the French Division Two side tonight at the Stade Michel Deflandre (ko 7.30pm).

Tony McGahan has named just a starting XV as he intends using up to 28 players in the course of the game “in an exercise of putting into practice all that we've worked at in training.”

“The boys have worked really hard in pre-season and now they've the opportunity to begin to fine tune things in this game and the next two at home.”

He also gets the chance to run the rule of some of the less well known players such as academy player Dave O'Callaghan who starts at blindside, just his second start in a Munster jersey following on from his start against Sale Sharks at the same stage of the season two years ago.

Its certainly a mix of youth and experience with Mick O'Driscoll, James Coughlan, Johne Murphy and Denis Hurley adding their considerable weight that will be required against a near full strength home side.