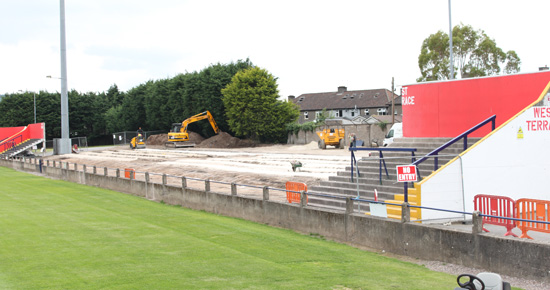 Work to replace the old Musgrave Park Stand in time for the August 19th pre-season game against London Wasps is on schedule.

Work to replace the old Musgrave Park Stand in time for the August 19th pre-season game against London Wasps is on schedule.

The old stand that had existed since the 1980s has now been demolished and the space cleared to allow for construction of a 3,000 seater stand although the Terraces that flanked the old Stand will remain.

Work on the erection of that new stand will commence on Monday next  (18th) when delivery of the structural material begins with Musgrave Park Facilities Manager Ian Dunne confident that all be ready for the pre-season game against London Wasps on Friday August 19th.

Musgrave Park, home to Dolphin and Sunday's Well RFCs, was purchased by the Munster Branch IRFU in 1938 but used during the war years to store turf.

Although club games were played there after the war ended, the first representative game was played in 1954 when Munster hosted Ulster in the Interprovincial championship

When work is completed the overall capacity of the ground will increase from 8,500 to 9250.