Six Counties: All as One 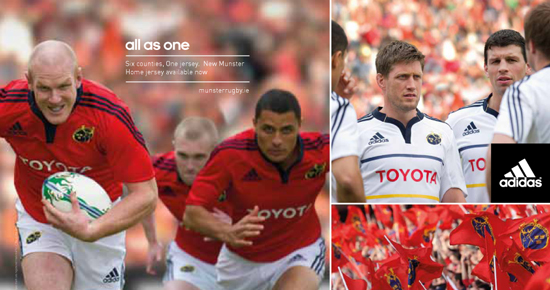 The home kit will be worn for the first time on pitch when Munster take on London Wasps in a pre season game at Musgrave Park on Friday August 19th, ko 7pm.

The home kit is classic Munster red, with navy piping and white shorts. The names of the six Munster counties are embossed into the fabric of the jersey in a repeating pattern across the chest and body of the jersey. The club motto, “To the Brave and Faithful Nothing is Impossible” is embroidered into the inside neck of the jersey.

The alternative kit is white with navy shorts, and features navy/blue, yellow and green horizontal lines and red piping/logos to represent the various county colours.

Both kits feature the latest in adidas performance technologies, including CLIMACOOLTM. A combination of performance fabrics, open mesh and ventilation channels keep cool air flowing in and heat and sweat flowing out ensuring players stay dry, comfortable and performing at their peak in even the most heated competition.

Speaking at the new kit launch Paul Moloney, Head of Sports Marketing, adidas Ireland said: “Munster Rugby is more than what happens on the pitch. It is six counties united behind their province, a legion of hugely committed fans, and a proud history and heritage. We wanted to highlight that in the new kit. We have enjoyed a hugely successful partnership with Munster Rugby for the past four years which has ensured that Munster players benefit from the very best in technological innovations in sports performance apparel. We look forward to seeing Munster wear the new jersey on the pitch next season.”

Garrett Fitzgerald, Chief Executive of Munster Rugby said: “The quality and design of the product that adidas continues to produce for Munster Rugby reflects the constant quest for success and high standards on the pitch. The jersey encompasses the cultural history of Munster whilst allowing the players perform at their peak. Munster are delighted to continue our partnership with adidas and look forward to the launch on August 11th”.

There is also a complete range of training wear and off-pitch apparel with everything available to pre-order through the Munster Rugby Stores in Cork, Limerick and online here. All items will be available in-store  from August 11th and the jersey is priced at RRP€;63.

Check out the details about our pre-order jersey competition exclusive to the Munster Rugby Store here.  Get the new jersey delivered to you by a player!