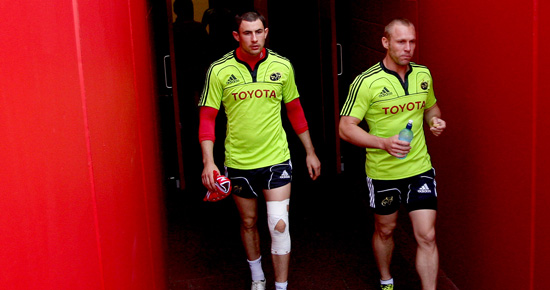 It may be a new sponsor name on the letterhead but as far as Munster players are concerned it’s that time of year again, spring’s in the air and European competition arrives in the shape of English Premiership side, Munsterman Conor O’Shea’s Harlequins.

It may be a new sponsor name on the letterhead but as far as Munster players are concerned it’s that time of year again, spring’s in the air and European competition arrives in the shape of English Premiership side, Munsterman Conor O’Shea’s Harlequins.

In the weeks after the Toulon defeat, all the outside attention was directed at Munster's reaction to missing out on Heineken Cup quarter final qualification and since then, it's been how they've coped with not been in it.

But the players themselves bring the realism that comes from the environment they dwell in. When asked at Wednesday's media briefing about Munster's recent record of successive wins, full back Felix Jones seemed unaware that they'd won their last 10 game, referring to the "eight or nine or whatever," they'd won, and in insisting that, "we're in no final yet," while at the same time warning that despite the recent good form, "we can't fall in love with ourselves."

Wise words from a young lad who has come back from two career threatening injuries to claim the full back spot on this Munster side and at the same time put himself bang in contention for a place in Declan Kidney's World Cup squad. Not that he'll allow himself be distracted by such lofty ambitions.

"Of course it's in the back of the head. It's in the back of every professional player's head. But that's exactly where it is in my case anyway. Look it's great to be where I am today. Where that is, is playing for Munster, I couldn't be happier.

"I'm here now playing in a back three with Doug Howlett, legend. With Keith (Earls), probably the best winger in the world at the minute. Ronan O'Gara! Aah Man…………."

At 23 years of age Jones is one of a clutch of young backs starting to catch the eye, others being scrum half Conor Murray who celebrated his 22nd birthday last week and the 'veteran' 23 year old Lion, Keith Earls who'll win his 56th cap tomorrow against Harlequins with the likes of Danny Barnes, Simon Zebo, Declan Cusack and Duncan Williams waiting in the wings.

Save for the game against Scarlets Jones has been the preferred starting 15 since the game against Cardiff Blues and the only change to the starting XV this time, from the one that ran out against Brive is Paul Warwick at centre for Sam Tuitupou who is named on the bench.

The big news of the day is of course the selection of Paul O'Connell on the bench almost a month to the day that he hobbled off the Thomond Park pitch and maybe the biggest roar of the afternoon will be reserved for when McGahan springs him from the bench.