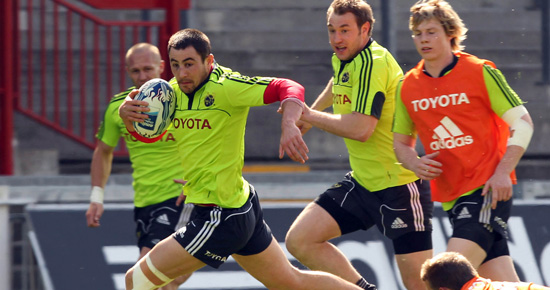 It was a case of all hands on deck today at Thomond Park Stadium as Munster began their preparation for Saturday’s Amlin Cup semi final with a lively squad session that featured Paul O’Connell.

It was a case of all hands on deck today at Thomond Park Stadium as Munster began their preparation for Saturday’s Amlin Cup semi final with a lively squad session that featured Paul O’Connell.

The Munster skipper took an active part in the field session fuelling speculation about the exact date of his return to action but coach Tony McGahan was non-committal on that particular issue instead adopting a wait and see stance.

“It's far too early to say really. It's good to see him back but we'll wait to see how he comes through this and Thursday's session before we'll have an indication of when he'll be ready to resume.” McGahan said.

Felix Jones, who took a late clattering from Jerry Collins in the game against Ospreys last Saturday – one that earned the Kiwi a citing – that left the full-back bloodied and requiring treatment from the Munster medics, was in lively form at training this afternoon as was the now bearded Barry Murphy who showed enough to suggest he's ready for game time sooner rather than later.

Munster will name a squad for the Harlequins game tomorrow afternoon, complete their squad training on Thursday and the team will be finalised after that and announced on Friday 12 noon.

A small number of tickets for the game are still available from the usual outlets with Thomond Park Stadium officials expecting them to be snapped up as they gear themselves for a full house on Saturday.