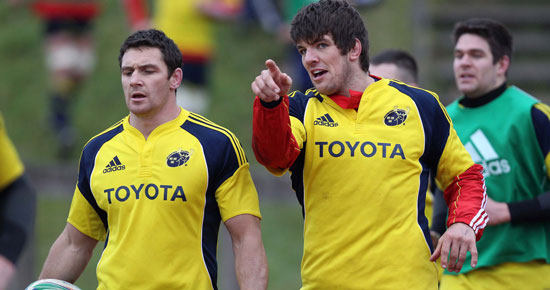 Munster’s international contingent who sat out last week’s game in Llanelli will be on board when the team flight departs Cork airport this morning for Wales and the game against the Ospreys tomorrow at the Liberty Stadium.

Munster’s international contingent who sat out last week’s game in Llanelli will be on board when the team flight departs Cork airport this morning for Wales and the game against the Ospreys tomorrow at the Liberty Stadium.

Keith Earls, Ronan O'Gara – he captains the side –  Donncha O'Callaghan and David Wallace all start this time around while Felix Jones, Doug Howlett and James Coughlan are also included in a starting XV that shows fourteen changes, three of those positional, from last time out.

In the backline the inclusion of Felix Jones means a switch to centre for Paul Warwick with Lifeimi Mafi switched to thirteen in the absence through injury (eye) of Johne Murphy.

Up front only two of those who featured from the start against Scarlets, Marcus Horan and Donnacha Ryan, are retained with Ryan packing down this time in the back row.

Already qualified for a home semi final, the objective tomorrow is maintaining their good recent form according to Damien Varley. “It's all about momentum and keeping that as we go into the final stages of the season. We have the semi final of the Amlin the following weekend and this game couldn't come at a better time in that context. There is also huge competition for places in the squad so everyone's playing for their place and looking for a good performance to stake a claim for inclusion next time around. “

Ospreys lie in fifth place on 58 points and know that defeat tomorrow will end any thoughts of a semi final spot.