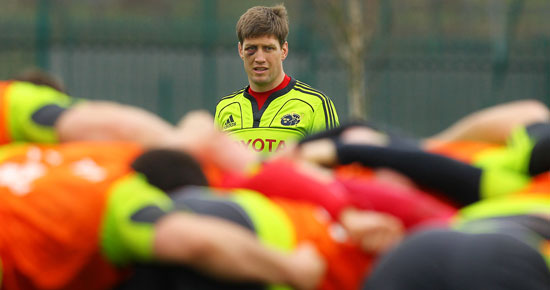 Munster’s 25 strong squad for the Amlin Challenge Cup quarter-final includes Denis Hurley who has been out with an ankle injury sustained in the Magners League game against Edinburgh in mid February.

Munster’s 25 strong squad for the Amlin Challenge Cup quarter-final includes Denis Hurley who has been out with an ankle injury sustained in the Magners League game against Edinburgh in mid February.

Munster began their preparation in Cork yesterday and they'll have their final session tomorrow in Limerick before flying out to Brive on Friday morning.

Paul O'Connell excepted, everyone came through Saturday's bruising encounter with a clean bill of health with one of the most bruised and battered being Ronan O'Gara who admitted as much at the routine media briefing held today in the Munster offices in CIT.

“The eye (that looked black n blue) isn't a problem at all but I'd be feeling fairly sore all over.” he said but it's not going to keep him out of Saturday's clash that he says will be “as tough as anything we'd expect in France.”

“You only have to look at their home record, some of the teams they've beaten -Stade (Francais), Clermont, Perpignan, Toulon – to see its going to be a tough assignment for us. They're a typical French side, they take pride in their home performance, their supporters expect that, so yes it's going to be massive task for us to win there.”