O’Gara Wins It For Ireland 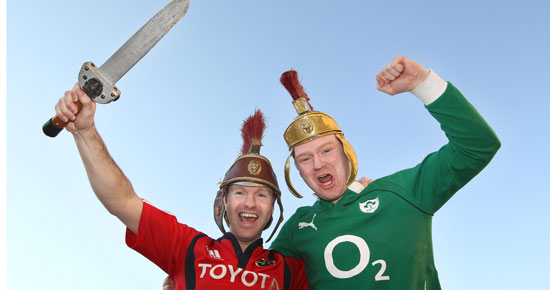 As he has done so many times in the past, Ronan O’Gara won this game for Ireland with a drop goal for a 13-11 victory.

As he has done so many times in the past, Ronan O’Gara won this game for Ireland with a drop goal for a 13-11 victory.

A Luke McLean try with five minutes to go left Italy leading 11-10, but after Italy had coughed up the restart and conceded a scrum, Ireland worked their way into the Italian 22 and master craftsman O'Gara dissected the posts with a drop goal for a two point victory that probably only he could have secured.

Italy led 6-3 at the break but Ireland took the lead when skipper Brian O'Driscoll scored a try three minutes after the restart that Jonny Sexton converted for a 10-6 lead.

From the restart Ireland were fortunate not to concede a try when Sergio Parisse almost intercepted Sexton's ill-judged pass to Gordon D'Arcy inside the Ireland 22.

Ireland should have extended their lead in the 56th minute when, with a clear overlap, Brian O'Driscoll, who otherwise had a fine game, flung a pass over Fergus McFadden's head into touch.

With seven minutes to go, Ireland were reduced to 14 when Denis Leamy was yellow carded, but crucially, O'Gara was at the helm by then, having replaced Sexton in the 65th minute, and once the Italians had taken the lead, it only remained for Ireland to work the space for O'Gara to weave his magic.

Neither were found wanting.