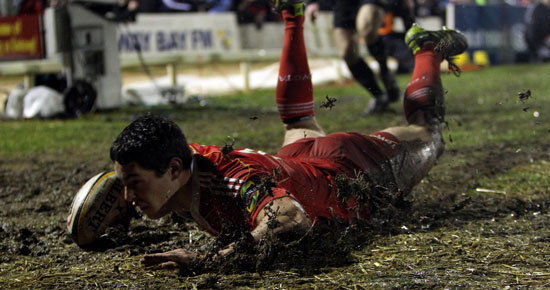 Munster surviived a series of injury time five metre scrums to win 16-12 having trailed at ther break at the Sportsground this evening,

Munster surviived a series of injury time five metre scrums to win 16-12 having trailed at ther break at the Sportsground this evening,

Munster trailed 6-3 at the break and then fell 12-6 behind when Ian Keatley landed penalties in the 41st and 55th minutes, Ronan O'Gara on the mark in the 44th minute.

Munster continued to dominate territorially and when Barry Murphy hacked a ball through in the 64th minute Tom Gleeson showed everyone a clean pair of heels to score in the corner. O'Gara landed a supern conversion to edge Munster ahead.

O'Gara then dropped a neat goal to extend Munster 's to four points.

However there was to be a twist in the tale as Connacht launched a furious late assault on the Munster line only to be denied by a massive Munster reargaurd action.

In a first half played in driving rain, it was a tale of two kickers, Keatley – reported to be joining Munster at the end of this season – opened the scoring with a 4th minute penalty that Ronan O'Gara cancelled out five minutes later.

Keatley restored Connacht's advantage in the 14th minute and both he and O'Gara missed further efforts in the 23rd from distance into the wind and rain from the Munster 10 while Keatley 37th minute effort was a bad miss.