Changes to British and Irish Cup Side 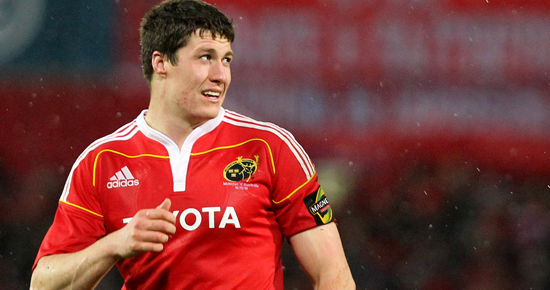 The changed format in this season’s British and Irish Cup whereby two teams emerge from each group makes Munster’s task of making the play-offs that little bit easier as they head for England tomorrow morning for the game with Bristol on Sunday, ko 3pm.

The changed format in this season’s British and Irish Cup whereby two teams emerge from each group makes Munster’s task of making the play-offs that little bit easier as they head for England tomorrow morning for the game with Bristol on Sunday, ko 3pm.

For Sunday’s game, Munster will be without Irish international Donnacha Ryan, called up to the Heineken Cup squad in place of the suspended Paul O’Connell, but his loss is compensated for by the return of Ian Nagle who missed last week’s game through illness.

Anthony Foley makes a number of positional changes with Scott Deasy named at outhalf, Sean Scanlon moving into fullback and Declan Cusack taking his place on the replacements.

Tommy O'Donnell moves to the blindside with Niall Ronan starting at seven and academy player Dave O'Callaghan named on the bench.  There is also one change to the front row with Stephen Archer starting this week and Borlase named as a replacement.

A surprise opening round defeat to Llanelli at the Waterford Regional Sports Centre put last year’s beaten finalists under immediate pressure but they responded in superb fashion to run out 47-14 winners over Melrose in Scotland last weekend having been asked to come from behind to do so.

Sunday’s encounter will be much more demanding according to their coach Anthony Foley. “It was a tough game when we played them last year in Nenagh and I’d expect much the same from them in their home ground. From here on in it is knock-out rugby, no margin for error.”

“The result against Llanelli was disappointing to say the least,” Foley continued, “but in fairness the lads responded positively and last weekend played really well to get the bonus point and leave our destiny in this competition in our own hands.”

Foley of course will play a central role with the senior squad in their attempt to build on last week’s win over Ospreys and he’ll be pitchside at the Liberty where a Munster victory would see the Welsh side almost certainly out of the Heineken Cup and provide Foley’s charges with a timely boost.

“Of course they’ll be glued to the telly and hoping we can get a result. And yes it would be a boost but I don’t think it’ll have a huge impact on our game in Bristol. We’ll be judged on what we do at the Memorial Stadium, nothing else and they (lads) know that.”

Foley himself of course has the personal boost of having been named yesterday as Ireland A forwards coach, a role he is more than pleased to perform. “I was a bit taken aback really when Eddie Wigglesworth rang me and asked me would I be interested. Interested? I’d have taken the hand off him with an offer like that. It’s the ambition of any young coach to coach at that level and I’m absolutely delighted and looking forward to it.”