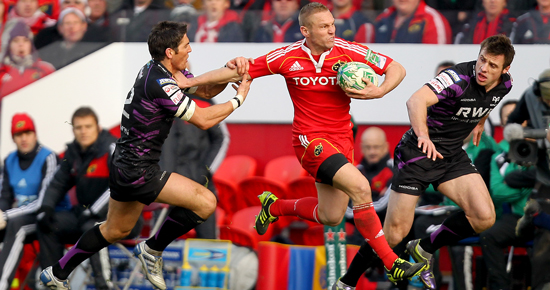 Munster won their round three Heineken Cup clash against Ospreys 22-16 in Thomond Park this afternoon.

Munster won their round three Heineken Cup clash against Ospreys 22-16 in Thomond Park this afternoon.

Munster may have scored three tries on the day but this was a hard fought battle until the final whistle as they held on to a six point margin when reduced to 14 men for the last ten minutes after a Paul O'Connell red card.

In the opening half Ospreys number 10 Dan Biggar kicked two out of three penalty chances to give the visitors six points. Doug Howlett scored the first try of the game after ten minutes with O'Gara adding a penalty just before the break to give Munster a marginal two point lead at halftime, 8-6.

On the return Tommy Bowe grabbed an intercept try running the length of the field to score under the posts moving Ospreys five points ahead before Munster responded with tries from David Wallace and Johne Murphy, O'Gara converting both, 22-13 after 63 minutes.

Ospreys claimed a losing bonus point when Biggar added his third penalty to give a final scoreline of 22-16.

Tony McGahan after the win "I thought we showed great intent and great endeavour today. The pressure is really on the home sides and you can't afford not to get your four points."