In Pics: Munster v Australia in the Sony Ericsson Challenge 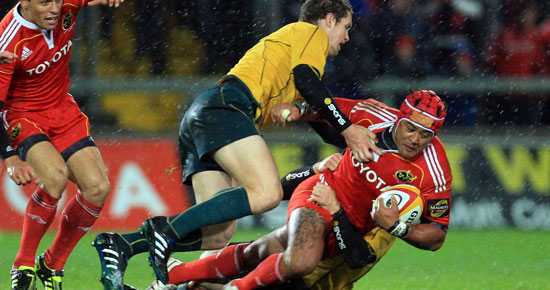 Check out the pictures from Munster’s inspirational win against Australia as they defeated the visitors 15-6 in appalling conditions in Thomond Park.

Check out the pictures from Munster’s inspirational win against Australia as they defeated the visitors 15-6 in appalling conditions in Thomond Park.

The Jame's Coughlan led Munster side created history in Thomond Park on Tuesday night defeating Australia there for the first time.

After meeting on nine occasions since 1947 it's all square once again with both sides recording four victories and a draw.  The previous three victories had all taken place in Cork.

View the gallery from the game here.