Galwey Puts Quinlan Right Up There. 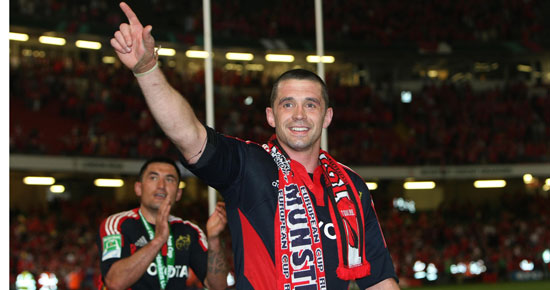 On Saturday 21st October 2000, Mick Galwey became the first Munster player to win 100th competitive caps and number 6 on the Munster team that day was 26 year old Alan Quinlan. Today, Alan Quinlan becomes only the second Munster man to be capped 200 times for his province.

On Saturday 21st October 2000, Mick Galwey became the first Munster player to win 100th competitive caps and number 6 on the Munster team that day was 26 year old Alan Quinlan. Today, Alan Quinlan becomes only the second Munster man to be capped 200 times for his province.

“I first came across him,”Galwey recalls with a grin,”when he came in one day and played a game with Shannon.  And what amazed was, he was very quiet, didn't say a word. Came in, played in the back-row, I think it was a friendly here in Thomond, myself and Brian Rigney in the second row and he'd have been jumping at the back. And did exceptionally well. But, believe it or not,  would have been a quiet kind of a fella right,” says Galwey warming to the topic, his grin ever widening.

“But then, about a week later I saw the real Alan Quinlan. Once he'd found his feet and the whole lot like,there was no shutting him up. So much so, that the boys started calling him Cheeky. That was his first nickname. Because cheeky is cheeky, I think it' self explanatory.”

But Galwey saw something special  in the cheeky one? “The one thing I would have to say about him from day one, he had immense ability.  Not alone was he talented, he had, and I suppose it's what we call the X factor, he had that bit extra.”

“Y'know, you often see young talented fellas, very ambitious, but he had what you needed.  I suppose playing for Clanwilliam against Kilfeacle in local derbies would harden you up. And certainly, he came in with that package.” he says laughing.

“Wasn't afraid to give it a go, wasn't afraid to get stuck in. Never  fazed by taking on seasoned internationals, seasoned club players because back then twas all club. Found his feet very quickly. So much so that he was soon a feature in the Shannon team. They started to do well before he knew it he was playing for Munster. So his rise was phenomenal.”

And given that games weren't as plentiful when Gaillimh was playing in his prime he still marvels at his friend's achievement, understanding completely how he managed it.

“I remember being there when Alan got his first cap, his few caps and his Heineken Cup start. Y'see, they all meant so much to him and even to this day I can still see that putting on the Munster jersey means so much to Alan. That's the reason he's still there. He doesn't take it for granted. We always said that any day ye pull on a Munster jersey is a great day and Quinny would always be thinking along those lines.”

“He's a competitor. Y'know ?  He's a scrapper. He's one of these fellas, like people say, he plays close to the edge.  Like, that's exactly it, the way he plays it. He'll fight for everything. He'll work for everything.”

“I won't go as far as to say he's the ideal man to play with because,” Galwey says bursting into laughter,”he'd wreck yer head at times. But with his rugby skills, if you could, ah, shut him up, he'd be the best player in the world. Part of his make is that he has to talk. Has to be vocal and it's not all bad. But certainly I think it's his hard work. You just cant beat it and look at the breakdown, Quinny's always there and that where he comes into his own

In the modern game players have to take the heat. If they can't,  that's a weakness in their part. And,”laughing again, ” if Quinny sees a weakness and no better man to spot one, he'll  drive it home. If he thinks he's upsetting a fella, he'll let him know time and time again.”

Witness Fabien Pelous in the '08 final, delivering a penalty conceding kick in the ass to the Munster  flanker to understand Galwey's point and the Currow man nearly doubles up in laughter. “Thats exactly it. Quinny annoys the life outta him. He gives Quinny a tap on the behind. Harmless, but still gets binned. Brilliant.”

But among the pantheon of stars that have played for Munster , Galwey included, where should Alan Quinlan be ranked ?

“He'd have to be up there with the best of them.” says Galwey, getting unusually serious. “He can play 6 7 and 8. He's a complete footballer even though the last number of years,” another hearty laugh,”I think he thinks he's a full-back.

“I think if anyone is to be honest in picking the best Munster back row of all time  – and we've been lucky enough to have some great back row forwards, the Colm Tuckers and all these lads that played against the All Blacks, the Ausies  then the modern fellas ,the Anthony Foley's and all the fellas down thru the years “if you were picking the best of all time you'd fnd it very hard to leave Alan Quinlan out of it.  I think that's the ultimate compliment I can pay him.”