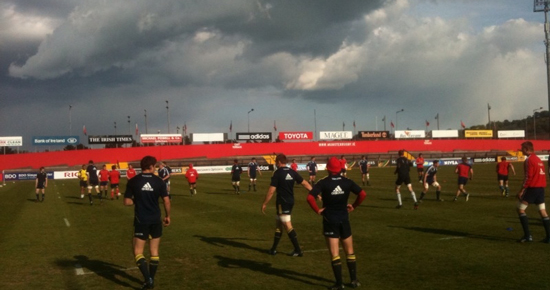 Season 09/10 saw the introduction of a new competition – the British and Irish Cup, to include 24 teams from England, Ireland, Scotland and Wales.

Season 09/10 saw the introduction of a new competition – the British and Irish Cup, to include 24 teams from England, Ireland, Scotland and Wales.

Munster were drawn in pool B with English sides Coventry, Bristol Rugby and Nottingham Rugby, Welsh side Neath and Scottish side Heriot’s FP.

The inaugural year of the competition and Munster go into the final this Sunday against the Cornish Pirates as the only unbeaten side, with an impressive defensive record, yielding only three tries in six games.

Looking back at the previous season the Munster “A” side played six games in total, against interprovincial opposition, Leinster and Ulster, and a touring Russian select side. With the introduction of a formalised competition structure for the 09/10 season Munster will have played in twelve development games come Sunday evening, four inter-pros, seven British and Irish Cup games and one challenge game against Esher – undefeated in every game to this point.

With the academy players at the core of this side the competition has given the young players an opportunity to play as a team on a regular basis, and the more collective game time has only enhanced their development and showcased what they are capable of to a wider audience.

The competition has raised the bar for up and coming talent, the regular game-time in a Munster jersey has afforded young players the opportunity to push for Magners League inclusion and even Heineken Cup time in Scott Deasy’s case.

Munster’s B&I Cup match day squads have been selected from a panel of 45 players, with an average age of 21 years. Thirteen academy players and eight sub academy players have represented Munster in the competition this season.

Those accumulating the most game-time include training contracted player Declan Cusack, academy players Ian Nagle, Danny Barnes, Stephen Archer, Dave Foley, Scott Deasy and Peter O’Mahony. Not surprising that the same seven players have been offered development contracts with Munster for next season.

The introduction of the B&I Cup provides an extra competitive level in the step up from club rugby to Magners. The competition bridges the gap for developing players, the move up becoming more of a seamless transition, as evidenced recently in Munster’s 18-12 win over Connacht, where five academy and one sub academy player took to the field.

As Munster look to a weekend where they contest a Magners League semi final and a British and Irish Cup Final, it is fair to say that Munster are striving to fill that gap and are producing players for the future.