No Change For Munster 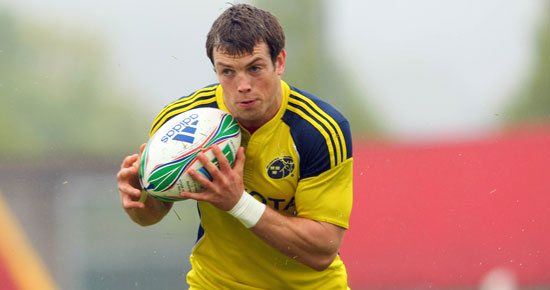 The Munster side that will start in the Heineken Cup semi-final clash with Biarritz Olympique on Sunday in San Sebastian remains unchanged from the one that saw off Northampton Saints in the quarters.

The Munster side that will start in the Heineken Cup semi-final clash with Biarritz Olympique on Sunday in San Sebastian remains unchanged from the one that saw off Northampton Saints in the quarters.

In fact there is only one change in the match day 22 from that day with Billy Holland missing out this time for a place on the bench as the Munster management opt for a 5:3 forwards/backs split on this occasion rather than 6:2 last time around.

And if former Academy player Holland was the one asked to step up to the plate on April 10th, it’s another Academy product Scott Deasy who answers the call in San Sebastian, named on the bench alongside fellow backs Peter Stringer and Lifeimi Mafi.

Doug Howlett and Ian Dowling showed no ill effects after training in Musgrave Park on Wednesday and return to the starting XV having picked up injuries against Northampton while Keith Earls resumes his partnership with Jean de Villiers in midfield.

Speaking aftr he announced the side at lunchtime, Tony McGahan said, “Doug and Ian came through Wednesday’s session well and we’ll see how they go later on in the Captain’s Run.

“Obviously we’re happy that both have managed to get themselves ready in time. It’s a tribute to their hard work and professionalism and also to the Munster medics and fitness staff that they are in the side.

“Players of their experience are crucial in games like this and this is a game that is going to require that and a lot more to win.”