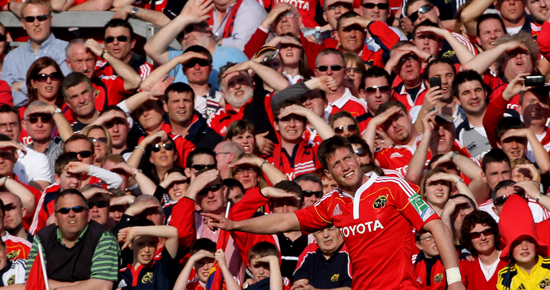 Got plans for the May weekend? We want to change them – Win a trip for two to Munster’s Heineken Cup Semi-Final against Biarritz in San Sebastian.

Got plans for the May weekend? We want to change them – Win a trip for two to Munster’s Heineken Cup Semi-Final against Biarritz in San Sebastian.

Munster Rugby are offering supporters the chance to win the following great prize for Munster’s Heineken Cup Semi-Final against Biarritz in San Sebastian!

The prize on offer includes:
o Trip for two people
o Two Nights – Ex Shannon
o Departs Friday 30th April, Returns Sunday 2nd May
o Bed and Breakfast for 2 nights in a 3* hotel in Biarritz
o Transfers from the airport, and from Hotel to the match
o Top Category Tickets

How to enter……….
Will you be at home alone with the curtains drawn, or will you join a crowd of thirsty Munster fans roaring at a big-screen tv?
Are you doing anything special for it – perhaps throwing a Heineken Cup party, having a BBQ, going down to your local club, or eagerly waiting on text updates as you work?

Either way we want to change your plans and if you let us know what you’ve planned for Sunday May 2nd you could be in with a chance to join Munster in the thick of the action in Estadio Anoeta!

Last chance:  The competition will remain open until 10pm Monday April 26th with the winner being randomly selected from all valid entries and announced on Tuesday April 27th.