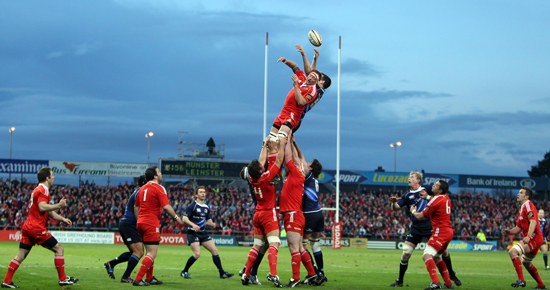 Leinster secure the win in Thomond Park tonight with a one point victory over Munster, final score Munster 15 – Leinster 16.

Leinster secure the win in Thomond Park tonight with a one point victory over Munster, final score Munster 15 – Leinster 16.

Munster led for 39 minutes with O’Gara kicking four out of four and Sexton and McFadden adding a penalty each.

But the Leinster fullback, Rob Kearney, found his way over the line just before the whistle with Sexton adding the conversion putting the visitors ahead by a point at halftime.

O’Gara added another penallty in the second half just putting Munster ahead 15-13, but this was to be the final score of the evening for the home side as Leinster pulled ahead once again with a Jonathan Sexton penalty after 65 minutes to give his side the win, final score Munster 15 – Leinster 16.

Donncha O’Callghan after the loss “They’re a quality team to be fair to them.  There’s no excuses, we were out played tonight, it’s just so disappointing.”

“This has got to hurt and this has to drive us on, there’s no point moping around and feeling sorry for ourselves for the week.”

Tony McGahan added “There’s no consolation in defeat, losing at home to Leinster is a bitter pill to swallow.  We fought very hard and there were two very good sides going at it.  They’re an excellent defence side and they matched everything really well.”

When asked if Paul O’Connell will make a return against Northampton, Tony said “At this stage the physios think he will be fine.”