Dowling Back For Munster 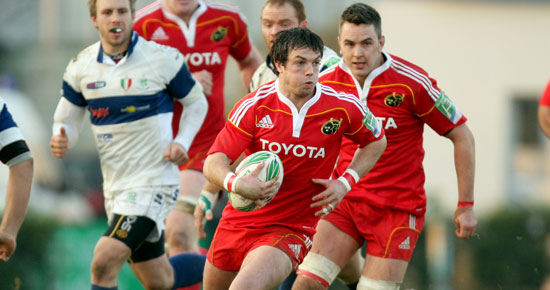 Ian Dowling has recovered from the ankle injury he picked up in the game against Edinburgh to take his place in the Munster side for tomorrow’s Magners League clash with the Scarlets at Musgrave Park (7.35).

Ian Dowling has recovered from the ankle injury he picked up in the game against Edinburgh to take his place in the Munster side for tomorrow’s Magners League clash with the Scarlets at Musgrave Park (7.35).

Also included in the starting XV is Niall Ronan who was also injured in that game while there is a return to action for Dave Ryan who has been sidelined up to this after a shoulder operation.

With Ronan O’Gara and Tony Buckley not available this time round, Munster coach Tony McGahan makes eight changes in total from the side that disappointed against Dragons last time, one of those positional with Paul Warwick stepping in to the out-half berth while Scott Deasy gets to wear the number 15 jersey.

The accumulation of three yellow cards means Lifeimi Mafi gets and enforced rest so Tom Gleeson will partner Jean de Villiers in midfield as he did in the game against Connacht back in December.

Up front it seems a case of freshening things up with Damien Varley starting ahead of Denis Fogarty and Julien Brugnaut in at tight-head for the internationally engaged Tony Buckley.

After a good showing in Newport, Billy Holland continues his partnership with skipper Mick O’Driscoll while Niall Ronan’s return to fitness sees him preferred to Tommy O’Donnell who is named on the bench alongside Alan Quinlan with Nick Williams starting at 6.

Meanwhile, the Scarlets will travel without their international contingent and injured wingers Morgan Stoddart, captain Mark Jones as well as centre Rob Higgitt, Simon Easterby and Dafydd Jones. However they do have two Wales internationals back as centre Jonathan Davies and hooker Ken Owens both return from Wales’ Six Nations training duty.