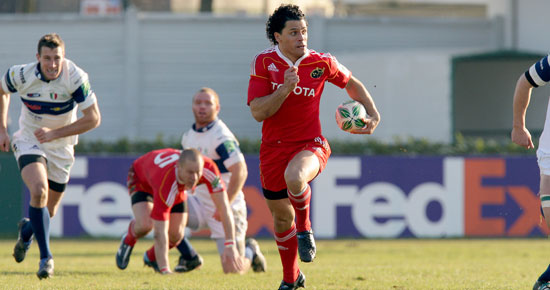 Doug Howlett will remain with Munster for the coming season at least.

Doug Howlett will remain with Munster for the coming season at least.

It was confirmed this afternoon that 31 year old Howlett who won his 49th competitive Munster cap last weekend against Edinburgh has agreed terms that include an option for a further season.

“Obviously I’m delighted to be remaining on here with Munster.” Howlett said. ” Professionally it’s been a good move for me and on the personal side my family are enjoying our time here and are very happy to remain for the immediate future.

“With the contract side of things now settled  I’m looking forward  to what I believe will be a very exciting second part of the season and hoping to play my part in helping Munster achieve success on the field.”

Munster coach Tony McGahan expressed his satisfaction when he said, ” I’m delighted we’re retaining the services of a player of Doug’s proven calibre.

“Doug’s contribution to the squad and management on and off the field has been central to our success since he arrived here two years ago.

“Next season is going to be particularly challenging given it’s a World Cup season. With our commitment to the international squad we would expect to be introducing more and more of our emerging young players. So it will be very advantageous to have a player of his quality and experience to call on.

” Its great news for Munster Rugby.”

Howlett arrived in Cork International Airport on December 2007 and just two weeks later made his debut in the Heineken Cup game against ASM Clermont Auvergne in the Parc des Sports Marcel Michelin.

He scored the first of his 12 tries to date, in the 42-6 win over Ulster in Musgrave Park, his first Heineken Cup try in the memorable win over Gloucester in Kingsholm and capped a great first (half) season by helping Munster to victory in the Heineken Cup.

A model of consistency throughout his time with Munster, in his first full season 2008/2009, he played in 22 of Munster’s 25 competitive games and this term has played in 13 of Munster’s 17 games, injury in the Heineken Cup game against Treviso ruling him out of two games.