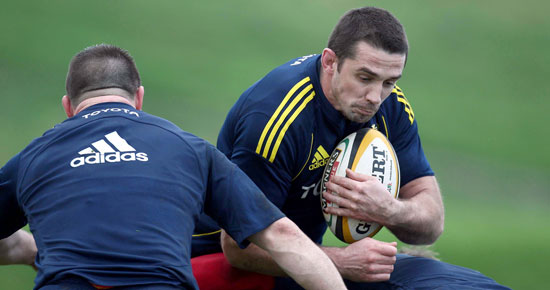 Other than those ruled out through injury, the Munster squad named today for the Scarlets clash on Sunday in Musgrave Park, includes most of those who featured in the game a fortnight ago in France.

Other than those ruled out through injury, the Munster squad named today for the Scarlets clash on Sunday in Musgrave Park, includes most of those who featured in the game a fortnight ago in France.

John Hayes is one who sits out this game and Jerry Flannery is also omitted with the a return likely sometime over the next two Heineken Cup games.

Munster trained today in UL in the morning inside in the gym with the afternoon  session taking place on the not quite all-weather soccer pitch beside the Bowl, half of which was frozen under a light covering of snow.

However, they managed to get through their drills with captain Paul O’Connell afterwards expressing his satisfaction with their outing. “It wasn’t ideal really but then you can’t do much about it (the weather). We got through our session well enough although had the weather allowed this was a day we had planned on doing an amount of scrum and line-out work.”

They plan to have another training session in Cork on Friday and indications from ground staff in Musgrave Park is that the game will go ahead as planned on Sunday although there will be further pitch inspections on Friday and again on Saturday.

The pitch there is covered and a further ‘warm blanket’ covering was added this afternoon.