Disappointment for Munster in Ravenhill 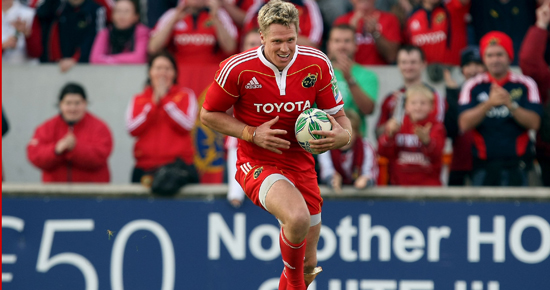 Disappointment was the reaction of a Munster dressing room following their 15-10 defeat to Ulster in Ravenhill.

Disappointment was the reaction of a Munster dressing room following their 15-10 defeat to Ulster in Ravenhill.

And the fact that they produced one of their best performances at Ravenhill proved no consolation for a side who found themselves 15 points down almost in as many minutes in the opening half. Two Simon Danielli tries at the close of the opening quarter sent Ulster 15 points clear but Munster’s response was positive and a Jean de Villiers try converted by Paul Warwick who then added a penalty left them trailing by five points at the break. They had played all the rugby in that opening half and continued in that vein for most of the second but could not break down a resolute Ulster defence. The nearest they came was when Warwick struck the upright with a 63rd minute penalty and from the subsequent put-in – after Ulster had knocked on – James Coughlan made good ground but his pass to was fumbled and Ulster survived.