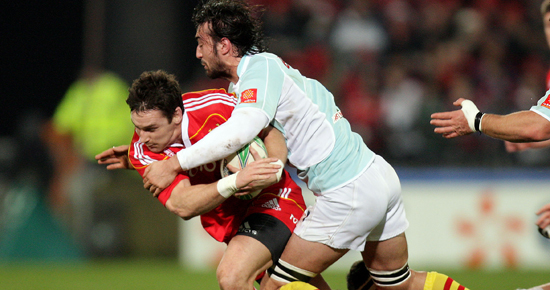 Job done with nothing in it as Munster win by one point in Thomond Park, defeating Perpignan 24-23.

Job done with nothing in it as Munster win by one point in Thomond Park, defeating Perpignan 24-23.

Munster opened the scoring with a penalty after 3 minutes from O’Gara but the celebrations were short lived when Perpignan’s number 6 Vivalda made it over for a soft try after 8 minutes.

Ronan responded with another penalty after 10 minutes putting Munster ahead 6-5.

Once again Perpignan broke the Munster line when scrumhalf Nicolas Durand made a break down the wing putting the visitors in front again, with fullback Porical converting it was 12-6 to the French side after the first quarter.

Munster followed up with 2 penalties from O’Gara before the break, bringing the sides all square going into the final half, 12-12.

The second half proved just as tight with both sides exchanging scores, Perpignan made it over the try line with their third try of the night from replacement Philip Burger while a man of the match performance from Munster’s Ronan O’Gara, their only points scorer, ensured Munster did just enough by winning 24-23.

Denis Leamy after the game”it was a tough game and I think we showed great character to come back again at the end.  O’Gara was fantastic again tonight, he owes Munster nothing and tonight he showed his class once again.”

“We made a couple of errors which led to their tries but we reacted well which was the most important thing, we could have easily gone back into our shell but we tagged on our points and we’ll take the win, we’re delighted with it.”

Denis Hurley commenting on his return to Heineken Cup action “I was over the moon to get picked again and when you get opportunities like this you’ve just got to take them.”

Talking about the return leg he said, “The group is still wide open, every game is must win and it’s never going to be easy going to France.  We just need to be fresh and have a real good cut off them.