Focus Must Be On Ourselves – O’Connell 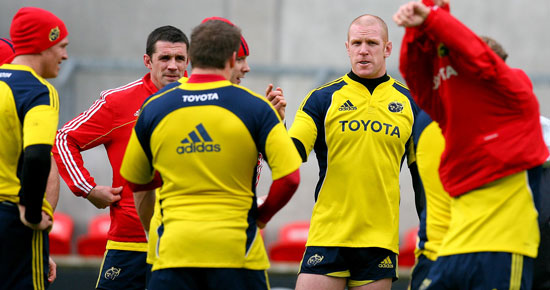 While Munster are all too well aware of the strengths of the Perpignan challenge, captain Paul O’Connell insists their focus must be on their own performance.

While Munster are all too well aware of the strengths of the Perpignan challenge, captain Paul O’Connell insists their focus must be on their own performance.

Speaking at the media briefing today in the Thomond Suite of Thomond Park Stadium, O’Connell admitted that current form was something of a concern,  “Our form is probably a bit of a concern. We’d rather be playing great rugby, rather be flying along in the Magners League. I suppose we’ve struggled a little bit. We’ve had injuries.

“I suppose that was our big strength last year in that it didn’t matter who pulled on the jersey we performed. And that’s something we need to look at and something we need to get right. I don’t think the lads underestimate this game or the task they face.” he said but reckoned they’d take encouragement from their last outing at ths venue. “The Ulster game for us was a great game to get going with back home. Against Ulster we were flying high that day. So for us it’s a case of the same for this weekend. Perpignan are very strong side. French champions last year so a great game for us to get back on the horse again.”

In terms of what part of the field the French present the greatest challenge O’Connell anticipates a reminder of the last clash with a French side here a year ago. “Obviously they’re a massive scrummaging side. The scrum is very big for them. They’re a very big mauling side. They maul most of the ball they get and they’re very good at it.

“They kick a lot from their own half of the pitch but when they get into your half, they’re a typical French side play with a lot pace, play with a lot of width.  It’s going tot be a very tough challenge. They’re a bit like Clermont in that they challenge you both ways. They take you on hard up front at scrum and maul and then when they’re in your half they like to go wide and have a very good backline to do that. It’ll be very similar to the Clermont game here last year in that they’ll aim to take us on both ways.”

French sides ahave often been accused of ‘not turning up’ when they travel but O’Connell doesn’t believe that will be the case on Friday. “Not at all,” he says adamantly. “Clermont showed up with all guns blazing when we played them here last year and we were lucky to get away with a win. The final is on in Paris this year. Perpignan are the French champions. They’re a real strong force in French rugby I’ve no doubt they’ll be here with a strong team on Friday night. They’ve everything to play for.

“Last time we played them we played an unbelievably tough game in the quarter final in Lansdowne Road and barely won. So it’s going to be a very tough game and I’ve no doubt they’ll field a very strong side.

In terms of the homework that’s been done on them?  “Yes we have looked at some of their games. We don’t normally watch full games. Individual players do their work and the coaches do their work. You try and get a pattern of what the opposition are doing as a team. And try and address their strengths.

“But the main thing we always do is try and focus on ourselves When you get too bogged down and too focussed on other teams you end up not playing  In that Ulster week it was all about our performance and that’s why we produced the game we did on the day. We were just concerned about ourselves and it’ll be the same this weekend.

“The main priority will be our own play and how we perform and the intensity we play at.  Sure we’ll look at their strengths. And address those strengths. But we have to focus on ourselves first and foremost.”