All Square At The Finish 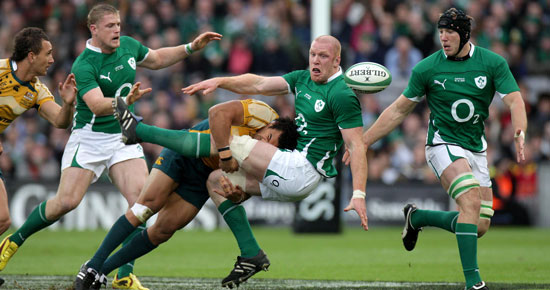 Australia led 10-6 at half time with a Drew Mitchell try converted by Matt Giteau who also landed a penalty, Ireland’s scores coming from the boot of O’Gara who landed penalties in the 5th and 21st minutes.

Australia extended their lead with a Giteau penalty in the 54th minute after he’d missed a relatively easy one earlier as the visitors dominated the third quarter.

However, Ireland received the boost they so badly needed with a Tommy Bowe try in the in the 56th minute and although Australia regained the lead witha Rocky Elsom try that Giteau brilliantly converted from the touchline, the home side ended the game the dominant side.

Bowe got over the line with two minutes remaining only for the video ref to rule it out but from the subsequent five metre scrum, Tomas O’Leary’s superb cut-out pass gave his skipper a free run to the line.