Quinlan Calm In The Midst Of The Storm 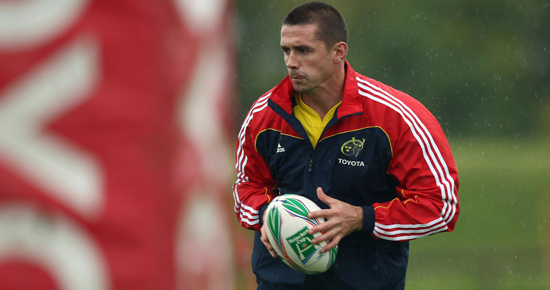 Tomorrow, when Alan Quinlan runs out on the hallowed turf that is Thomond Park he’ll have pulled on the Munster jersey for the 182nd competitive time leaving him the second most capped Munster player behind Anthony Foley (201 caps).

Tomorrow, when Alan Quinlan runs out on the hallowed turf that is Thomond Park he’ll have pulled on the Munster jersey for the 182nd competitive time leaving him the second most capped Munster player behind Anthony Foley (201 caps).

And that’s why he’s perfectly placed to answer the questions posed by the media about the supposed woes in the Munster camp ahead of what’s already been billed a must-win game for Munster on Saturday.

“I think all home games are must-win no matter what competition you’re playing so this one isn’t any different certainly as far as we’re concerned. And yeh, I know what you mean when you say that, particularly in the sense that out there there’s talk of crisis in the camp and things not going well,” he says.

“There’s no crisis in the camp, there’s no panic. This is as good a squad as I’ve been involved with. We’re a tight bunch, players and management and I’ve no doubt whatsoever that we have what it takes within ourselves to turn things around.”

Its almost 13 seasons to the day since the Tipperary man made his debut and when it’s put to him that references in a Sunday newspaper – to ‘ailing and aging’ Munster –  might have some relevance, his brow furrows and there’s an unexpected seriousness when he says, “Yeh, there’s a few of them right enough getting on like Hayes and Wally, Rog is no spring chicken either” but with grin erupting he declares, “but I’m not ailing at all thank God. So they can’t have meant me.”

“You can look at that this way.” he says. ” There’s a load of experience in the side and that’s what’s needed at times like this. They there’s the younger lads there as well and we have plenty of good young talent coming through. So no I don’t think we’re ailing and aging, I think there’s a good blend there.”

“I don’t know how many sides could lose six front row players and not be affected to some degree. But yes I do accept that our form has been patchy but at the same time it’s early days. It’s the end of October, not January and I’d prefer maybe if people would wait for a while longer before they judge us. Do that later in the year and if we have to hold our hands-up we will. We’ve always been honest. With ourselves and with the public I hope. “

The visit of Ulster is a huge test and Quinlan accepts that, “There were signs there last year they were heading in the right direction. They’re a good side playing good rugby right now. They were impressive last week against Leinster and on a formline through them (Leinster), we are underdogs big time on Saturday.”

“But we’ve been here before and as I said we have the experience to deal with it. Looking at soccer if you like, Liverpool were been written off a week ago and then they beat United – I was delighted I’m a Liverpool supporter and took great delight in rubbing that (win) into Axel (Foley, a United supporter) – and the whole thing changes.

“Look,” he concludes, “it’s early days. We’ve had problems. we’re working hard to get things right. Saturday will tell us how far we’ve travelled in that regard and how far we’ve to go. None of us will shirk responsibility. There’ll be no hiding places on Saturday. But none of us are looking for anywhere to hide.”