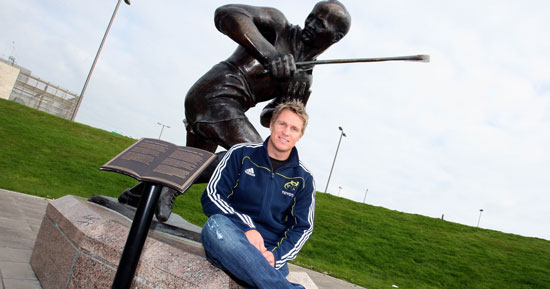 Jean de Villiers arrived in Cork Airport this morning looking surprisingly fresh after what has been a few hectic days for him.

Jean de Villiers arrived in Cork Airport this morning looking surprisingly fresh after what has been a few hectic days for him.

” I got back home from New Zealand on Monday with just enough time to pack my bags for the trip here,” he explained to waiting reporters. “But I’m feeling fine,” he continued, “and looking forward to the season ahead and trying to make a contribution to this Munster squad.”

The Springboks centre was met at Cork Airport by team manager Shaun Payne and Operations Manager Bryan Murphy before joining Chief Executive Garrett Fitzgerald in the Cork International Hotel for a media briefing.

Questioned about his state of readyness to get into action after a long Super 14/Tri-Nations campaign, he said, ” I haven’t really had that long a season because I was injured early on and missed the early games in the Super 14. So really the remainder of that campaign and the Tri-Nations has been my pre-season, so I’m pretty happy with my fitness.”

De Villiers was later taken by Payne to Limerick where he will be based and where the regulatory fitness/medical tests will be conducted tomorrow. He should be out for his first squad training session next week.