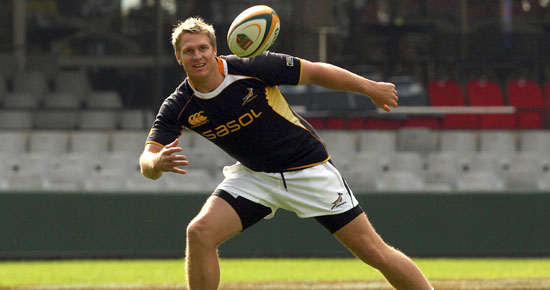 Jean de Villers, fresh from his role in helping South Africa to the Tri Nations title, will arrive in Cork next Thursday.

Jean de Villers, fresh from his role in helping South Africa to the Tri Nations title, will arrive in Cork next Thursday.

The Springbok centre who scored a try last Saturday in the win over New Zealand in Hamilton is due into Cork Airport next Thursday morning. .

Commenting on the news of his arrival, Tony McGahan said, “Jean de Villiers is recognised as one of the top mid field rugby players in world rugby and I’m  looking forward to having him in our squad. He brings a wealth of experience and a skill level that will  benefit Munster on and off the field.”

Not surprisingly with a player of his class, Western Province did their utmost to keep him, as Rob Wagner MD of Western Province  Rugby (Pty) Ltd, readily admitted, “We are obviously sad to be losing Jean.  As a captain and a player he has contributed significantly both on and off the pitch.  Whilst we did everything in our power to retain his services, Jean has made up his mind to join the great Irish club Munster.

“Western Province Rugby is sorry he is departing,” continued Wagner, “but we thank him for all that he has done for, and meant to Western Province and the Stormers and hope to see him back in the future.  We wish him all of the very best with Munster.”

As is the norm, he will have to undergo the usual medical and fitness tests before joining up with the Munster squad – they train in Limerick that day – but it is expected that he may feature in Munster’s squad for the game against Dragons in Musgrave Park on Sunday September 27th