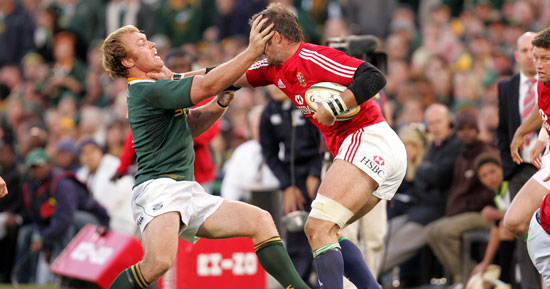 Schalk Burger has received an eight ban for the incident in the opening minute that saw Luke Fitzgerald require medical attention for an eye injury.

Schalk Burger has received an eight ban for the incident in the opening minute that saw Luke Fitzgerald require medical attention for an eye injury.

His team-mate Bakkies Botha has also been banned, for two weeks, for another dangerous incident that forced Adam Jones off the Loftus Versfeld pitch.

TV footage clearly showed Burger poking Fitzgerald in the eye and the player himself said afterwards, “”I was lucky I had my hands free and was able to stop him doing any damage.”

Sky commentators were in little doubt at the time that the incident warranted a red card rather than the yellow referee Christophe Berdos issued. And that after assistant referee Bryce Lawrence had advised the offence warranted, “a yellow card at least.”

Quite extraordinarily, South Africa coach Peter de Villiers insisted that Burger had been hard done by. “I don’t think it should have been a card at all,” the Springbok coach said, presumably after he had seen the video.

“For me and for everybody, this is sport. This is what it is all about. What people think and what people say to us is their opinion and we honour their opinion but it doesn’t mean we all agree with it.”

Lions coach Ian McGeechan was not present when De Villiers spoke but his reaction to the comments were,  “I am very disappointed if that’s what he said. Because for me you can’t see that and say it’s a part of the game that I would ever want to be associated with.”

De Villiers has not exactly covered himself in glory in the course of this tour. Widely criticised for his replacement policy in the opening Test that almost saw the Boks cough up a generous lead. He also came under fire for his selection for the second, with ironically, his replacements helping to snatch an unlikely victory.

Described in the Natal Mercury as ‘stubborn and inept’, he has also it appears, incurred the wrath of the South African Rugby Union for accusations he made suggesting that those who criticised scrum-half Ricky Januarie for being out of form were racist.

His latest outburst about the Burger incident – and its inferred criticism of the match officials – should have earned him a little interview with the IRB.

Before then, maybe he should take himself into a corner and have a real good chat. With himself.