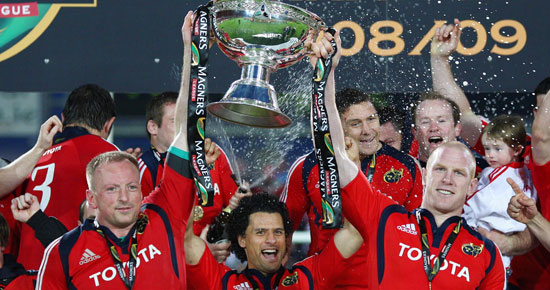 Four Munster players, Jerry Flannery, Paul O’Connell, Ronan O’Gara and Lifeimi Mafi have been included in the Magners League Dream Team For the season past.

Four Munster players, Jerry Flannery, Paul O’Connell, Ronan O’Gara and Lifeimi Mafi have been included in the Magners League Dream Team For the season past.

As is always the case in these instances there will be some raised eyebrows at the selection, Leigh Halfpenny for example who makes the team despite starting in just five of Cardiff Blues’ 18 outings (scored 3 tries). In contrast Doug Howlett started three times (15) more often and ended up with seven tries.

And on Friday night when Orlaith Fortune presented the trophy to Munster captain Paul O’Connell, the Lions skipper immediately called his teammate Mick O’Driscoll forward to share the moment. This was in clear recongition of the role O’Driscoll played in Munster run to the title.

O’Driscoll played in 17 of Munster’s 18 Magners League games, starting on 13 occasions and captaining the side in 8 of those games. It has to be assumed therefore  that he was just edged out for a place on the ‘Dream Team’ by his colleague who started just seven times in this year’s competition.