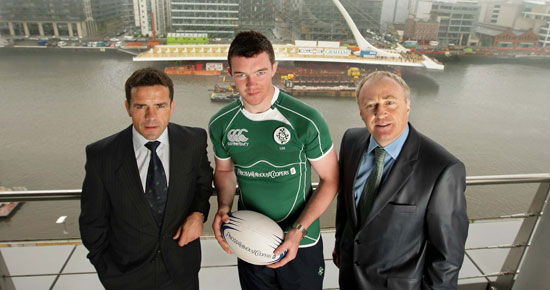 Munster Rugby Academy Player Peter O’Mahony follows on from his Irish U20s 6 Nations Captaincy as he assumes the role once again for the IRB Junior World Championships in Japan.

Munster Rugby Academy Player Peter O’Mahony follows on from his Irish U20s 6 Nations Captaincy as he assumes the role once again for the IRB Junior World Championships in Japan.

Ireland U20 Coach Allen Clarke announced his 26 man squad for the IRB Junior World Championship tournament this morning at a media conference in the offices of team Sponsor PricewaterhouseCoopers.

Joining O’Mahony are his fellow academy players Conor Murray and Andrew Burke who were both named in Munster’s Magners League squad against Cardiff last weekend, with Burke receiving his first Munster cap.

It is not only academy players making the trip to Japan as three Munster Rugby sub academy players have also been selected for the squad.  Garryowen’s Ronan O’Mahony keeps his place after the 6 Nations tournament and will now be joined by UCC’s David O’Callaghan and UL’s Brian O’Hara.

Sub academy player David O’Callaghan was involved with the UCC side that won promotion to Division 1 and Brian O’Hara won an All Ireland U20 cup medal with UL Bohs.

The squad is built on the foundation of the U20 RBS 6 Nations Championship squad which saw Ireland finish in the runners up spot behind France who took the title on points difference.   David O’Callaghan, Brian O’Hara and Nevin Spence all come into the squad, benefiting from their performances for the U20 Development team in their recent win against France in April in addition to Jonny Shiels who was capped for Ireland U19’s last season.

Ireland has been placed in Pool A of the Junior World Championship which is taking place in Japan for the first time.  Their opening three games see them play Argentina, defending Champions New Zealand and newcomers to the championship Uruguay.

The side will be captained again by No.8 Peter O’Mahony, who led the team during the U20 RBS 6 Nations Championship.