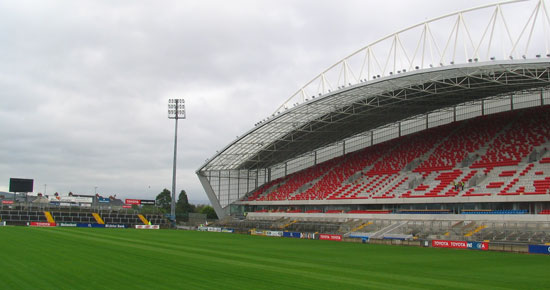 Undefeated in their World Cup qualifying campaign, the Republic of Ireland are currently joint top of Group 8 with World Cup holders Italy. The Bafana-Bafana will provide a useful test for Giovanni Trapattoni’s side and are likely to call on players such as Blackburn Rovers stars, Benni McCarthy and Aaron Mokena and Everton midfielder, Steven Pienaar.

The friendly will provide important preparation for the Republic of Ireland’s race to qualify for South Africa ahead of the closing Group 8 World Cup qualifiers against Italy and Montenegro in October.

Thomond Park Stadium Director, John Cantwell said ‘we are delighted to announce the second fixture with the FAI and particularly pleased that they would consider Thomond Park to host two senior international games over such a short space of time. The South Africa international will take place at a time when the rugby season will be back in full flow demonstrating the flexibility of the stadium and how versatile we have to be in catering for such a broad range of events.’