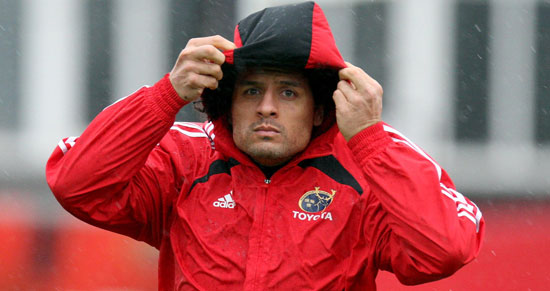 Munster’s side for the crucial Heineken Cup clash with Sale Sharks in Thomond Park Stadium tomorrow night, shows just one change in the starting XV from the side that defeated Sale back in October.

Munster’s side for the crucial Heineken Cup clash with Sale Sharks in Thomond Park Stadium tomorrow night, shows just one change in the starting XV from the side that defeated Sale back in October.

That change comes in the back-row where a fit again Denis Leamy replaces John O’Sullivan and there is also just one change on the bench from that time with Niall Ronan in for Justin Melck who has returned to his native South Africa.

The Munster side announced this morning includes both Ronan O’Gara and Paul Warwick. O’Gara missed Munster trip to Swansea last

weekend with a slight hamstring injury while Warwick was injured in that game sparking worries over the out-half berth but both came through yesterday’s rain lashed Musgrave Park training session with Warwick preferred at full back to Denis Hurley who is named on the bench.

Speaking at the squad announcement later in the Heineken Brewery Donncha O’Callaghan outlined the enormity of the task Munster face on Friday. “They’re a quality side, they really are. I watched them against London Irish and they were very impressive. They have quality players right across the field, they’re a big abrasive team, well able to put themselves about but at the same time they can play good rugby when they decide to.

“The group is still wide open. Any one of three can still win it – I wouldn’t rule Clermont out although they have to travel to Sale. So this is a cup final for both of us, simple as that.”