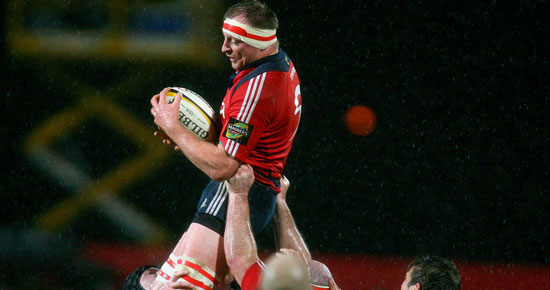 Mick O’Driscoll will captain Munster in the opening game of the season, in Rentschler Field this Saturday, ko 3pm(EDT).

Mick O’Driscoll will captain Munster in the opening game of the season, in Rentschler Field this Saturday, ko 3pm(EDT).

The side selected today after training in Canton, shows just one change in the pack from the side that started against the Eagles in Chicago one year ago.

That change comes in the backrow where twenty three year old Billy Holland takes over for the retired Anthony Foley, Holland will wear the number six jersey, Niall Ronan at number seven and John O’Sullivan anchoring the scrum.

Mike Prendergast who has returned to the squad after stints in Bourgoin and Gloucester, partners Paul Warwick at halfback while Keith Earls is an interesting choice at number thirteen alongside Lifeimi Mafi with Anthony Horgan and Brian Carney on the wings.

Coach Tony McGahan is expecting a tough encounter against a side who already have the benefit of a recent outing against Clermont Auvergne.

“They’ve been together in camp for the past month and are essentially the side that played in the recent Churchill Cup so they are well used to each other at this stage and we know from the game last year what we can expect from them.

They’re a good physical side and the conditions that we’re expecting on Saturday will make things even harder for us.  But we’re looking forward to it, the lads have worked hard this week and now it’s time to put that hard work to use.”

The conditions McGahan referred to are the temperatures that are expected to rise to 90 degrees in Hartford, CT.