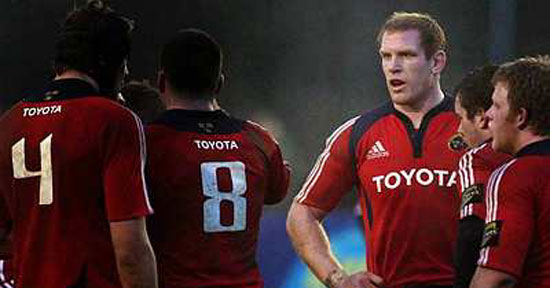 Despite a second half try from Toyota Man of the Match Paul O’Connell Munster lost this final Magners League game 21-18 to Glasgow Warriors.

Despite a second half try from Toyota Man of the Match Paul O’Connell Munster lost this final Magners League game 21-18 to Glasgow Warriors.

Munster’s efforts certainly weren’t helped by two early first half errors that gifted the Warriors 14 points thanks to tries from Lome Fa’tau and hooker Doug Hall.

However Munster played their way back into the game and a try from skipper Anthony Foley converted from the touchline by Ronan O’Gara who also landed two penalties left them trailing by just a single point at half time.

A controversial Thom Evans try in the 65th minute left Munster with a mountain to climb and that score was added to by Parks’ conversion and although Munster launched a series of attacks that yielded a try for O’Connell Glasgow held on grimly.